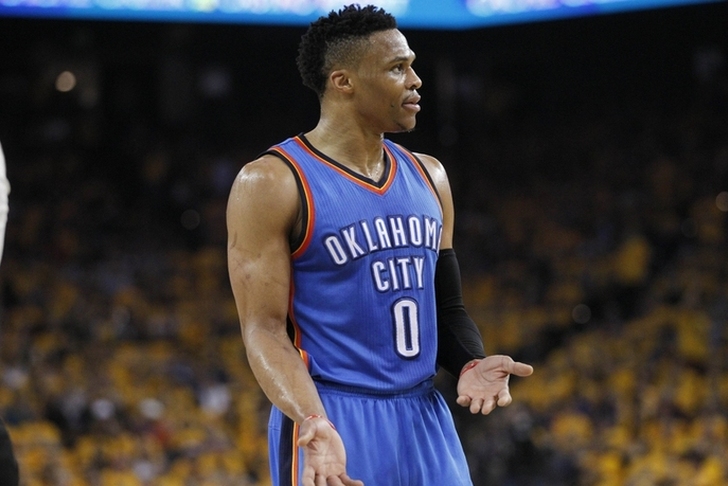 NBA Free Agency has officially been underway for two weeks, yet it feels like it's already over. Nearly all of the big names have already signed new deals, and as such, many teams are exploring trade possibilities for players that are on the block. Most of the rumors have circled around Carmelo Anthony, but the New York Knicks have reportedly taken him off the trade block and are trying to convince him to stay in the Big Apple. Here are all the latest NBA rumors you need to know:

Thunder "cautiously optimistic" about Russell Westbrook extension
The Oklahoma City Thunder are working to sign Russell Westbrook to a contract extension before the start of the new season. He has not already signed one, as some had previously reported, but OKC is "cautiously optimistic" that he will, according to Fred Katz of the Norman Transcript.

If he doesn't sign an extension, the Thunder may explore trading him to get something in return for Westbrook, hoping to avoid another Durant-type situation where they may lose him for nothing in free agency.

Warriors may lose Patrick McCaw next summer
The Golden State Warriors are letting Ian Clark walk in free agency this offseason due to their salary cap situation, and they believe they have a viable replacement for his role in Patrick McCaw. However, there's a good chance McCaw may not be back with the team after the upcoming season, according to ESPN's Bobby Marks.

One name that NBA teams have circled for next summer is the Warriors Patrick McCaw. Could come at a high cost for GSW to retain next July.

Kevin Durant took significantly less money on a one-year contract this offseason to help Golden State re-sign Andre Iguodala and Shaun Livingston, but is expected to opt out and re-sign with the Warriors for more money - if not the max.

As such, they probably won't have enough space to bring back McCaw, who averaged 4.0 points on 43.3 percent shooting in 15.1 minutes per game as a rookie last season.

Knicks want Carmelo Anthony to "open up" trade wish list
The Knicks have stopped negotiating a Carmelo Anthony trade with the Houston Rockets after talks stalled due to the salary cap complications involved in such a deal. New York is talking to Anthony about staying with the franchise, but want him add more teams to his trade wish list, according to Marc Berman of the New York Post.

The primary hope, according to the source, is Anthony decides to open up his wish list beyond the Rockets and Cavaliers, as he has a no-trade clause. The Celtics would’ve been in play, but they traded for Gordon Hayward.

If the Knicks can’t strike a deal to gain meaningful future assets or future cap space, the thought process of letting Anthony return is logical. He likely would opt out of his contract after next season and give them full salary-cap flexibility.

Anthony, Houston’s Chris Paul and LeBron James, who are close friends, all could become free agents in 2018 and decide to unite, as they have talked about before.

Anthony has a full no-trade clause, though he said he would waive it for either the Rockets or the Cleveland Cavaliers. However, neither team can offer a package New York would want.