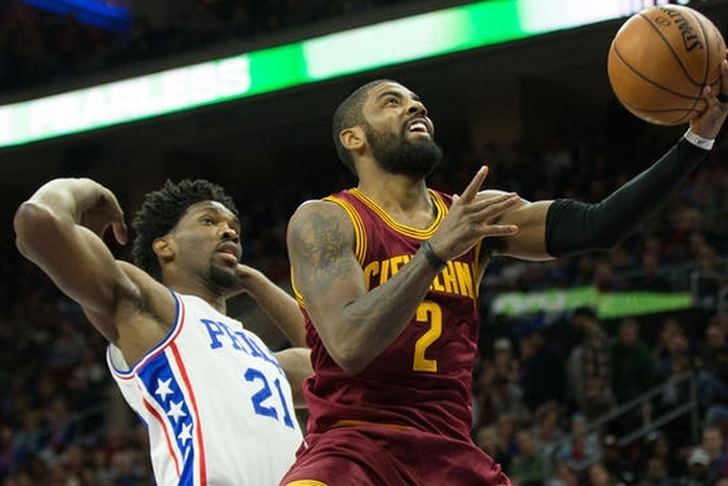 The NBA offseason has reached a quiet point with free agency essentially over and training camps still far away on the horizon.  A possible Kyrie Irving trade remains at the forefront of headlines, but there is still plenty of other happenings worth monitoring around the league, including Joel Embiid's health and possible expansion. Here are all the latest NBA rumors you need to know.

Suns will only trade for Kyrie Irving if he gives franchise long-term commitment
The Phoenix Suns were one of the two frontrunners to land Irving in a trade, but talks between them and the Cleveland Cavaliers broke down due to Phoenix's reluctance to include either Devin Booker or rookie Josh Jackson in the deal.

However, the Suns could be swayed to part with Jackson but would need a long-term commitment from Irving to do so, according to Joe Vardon of Cleveland.com.

I heard Phoenix would be very interested in dealing for Irving. But the Suns would want to know if Irving will sign an extension to stay in Phoenix. His contract is up in the summer of 2018. I'm told Irving is not about to commit to any team at this point. He has two seasons left on his contract and wants to keep his options open.

The Suns would love to put together a package with Brandon Knight, T.J. Warren and Bledsoe for Irving and some others such as Iman Shumpert or Channing Frye to make it work on the salary cap. That has little appeal to the Cavs. Knight has a torn ACL knee injury and will miss the entire season. So forget him.

I still think Phoenix is a likely destination for Irving. The Suns can be tempted at some point to give up Jackson, an athletic small forward who would help the Cavs. He was the No. 4 pick in the draft. But right now, it appears the two teams are just waiting to see if anything else comes up, such as a third-party deal.

Phoenix's offer for Irving centers around Eric Bledsoe, but Cleveland is also seeking a promising young player and a first-round pick from them.

Philadelphia 76ers center Joel Embiid, who has played in just 31 games during his first three years in the NBA because of foot and knee injuries, told The Undefeated's Marc J. Spears that he expects to be ready for training camp.

Embiid, a counselor at a Basketball Without Borders camp before Saturday's NBA Africa Game in Johannesburg, South Africa, said he's doing non-contact drills while recovering from a torn left meniscus, but he hasn't been cleared to play 5-on-5 yet.

"I can do everything but play 5-on-5 and one-on-one," Embiid told Spears. "I think I will be ready for training camp."

TRENDING: NBA Teams That Made The Playoffs Last Year, But Will Miss Them This Year

NBA expansion highlight unlikely
NBA commissioner Adam Silver told The Player's Tribune last week that the league is looking into possible expansion in the coming years, but Steve Kyler of Basketball Insiders warns that relocation is much more likely than expansion - and that New Orleans Pelicans are the team most likely to be moved.

A run through the NBA pegs the Pelicans as the only team on the low end of the revenue and attendance scale, while also having a lease that could be terminated in the next decade.

So, while expansion is the topic most want to talk about, the truth is the NBA is not going to seriously consider expansion anytime soon, making relocation the only real means for an NBA team to change cities. In that scenario, it couldn’t happen for at least seven years, and that’s only viable if the Pelicans decide to consider it, and that won’t happen while the Benson family controls the team.