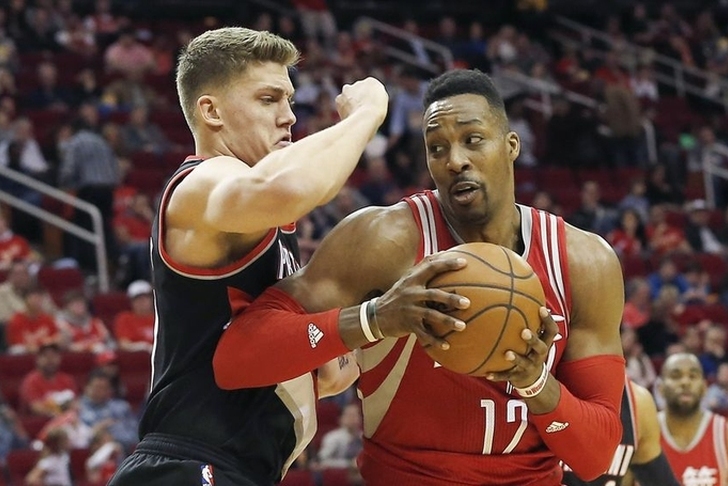 NBA teams around the league are making their final preparations for the start of free agency on July 1. With the rising salary cap, many players are due for significant pay raises - and virtually every team has cap space. Check out the latest NBA news and rumors below:

Trail Blazers making Howard top target
Portland has been relatively quiet about their free agency plans this summer, but they reportedly have their sights set on Dwight Howard, according to John Canzano of the Oregonian:

NBA GM tells me whisper is Trail Blazers FA plan centers around… Dwight Howard. How does that potential strike you?

The Blazers also planned to pursue Hassan Whiteside, but they were clearly fourth in the race to land him behind the Heat, Mavs and Lakers.

Howard opted out of his contract with the Rockets and isn't expected to return to Houston. He currently has meetings scheduled with the Celtics and Hawks, while the Heat could also be interested.

Spurs not interested in Conley?
San Antonio has been linked to Mike Conley in free agency as a potential upgrade over Tony Parker at point guard, but they might not be interested, according to ESPN's Marc Stein:

This may be in response to Conley not reciprocating San Antonio's interest, as he said Parker's presence put the Spurs further down his list. Along with the Grizzlies and Spurs, Conley is being heavily pursued by the Dallas Mavericks. He averaged 15.3 points and 6.1 assists per game last season.

76ers targeting trio of guards
Philadelphia is desperately trying to upgrade their backcourt and already plan to pursue Jordan Clarkson in free agency, but there are several other guards their targeting this offseason - namely Dion Waiters and Ricky Rubio - according to the Sporting News:

A source told Sporting News that the Sixers will also show interest in two other restricted free agents, Dion Waiters of the Thunder and Allen Crabbe of the Trail Blazers. The Thunder would likely let Waiters — a Philadelphia native — go without matching because they’ve acquired guard Victor Oladipo, and Philadelphia could make a sizable offer for Crabbe, who is 24 and had a breakout year with the Blazers. Crabbe, though, is stuck behind guards C.J. McCollum and Damian Lillard, and Portland would not be able to match an offer if it is big enough.

Philadelphia explored the possibility of working a trade for Minnesota’s Ricky Rubio on draft night, though that would likely have to be a three-team deal in order to provide the Timberwolves with the kind of veteran help the Sixers lack. Rubio is expected to be available again this summer. The Sixers have also expressed interest with the Rockets in point guard Patrick Beverley, a source told Sporting News.