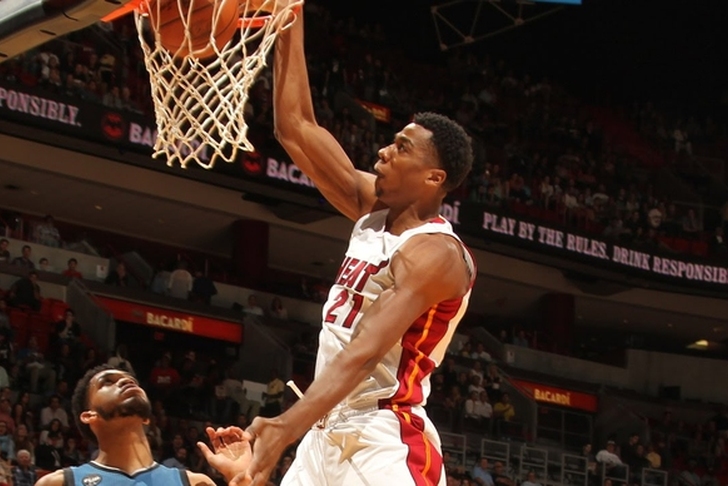 Hassan Whiteside to Dallas?
Miami Heat center Hassan Whiteside is the top free agent center available this offseason, and was thought to be favoring the Los Angeles Lakers or New York Knicks - teams that can offer him a max deal - or be favoring a potential return to the Heat. However, according to the Miami Herald's Barry Jackson, the Dallas Mavericks have emerged as a serious candidate to land him:

The Dallas Mavericks have emerged as a serious suitor for Heat center Hassan Whiteside, who becomes a free agent on July 1. ESPN Dallas reported on Thursday that Dallas expects to be granted a meeting with Whiteside in the opening hours of free agency.

A friend of Whiteside did not dispute that report and said Whiteside, through back-channels, is generating considerable interest around the league. ESPN identified Portland as another team expected to seriously pursue Whiteside. That friend said Whiteside prefers to stay with the Heat if all things are equal financially.

But the Heat has given no indication whether it’s willing to offer Whiteside a max deal, even though Heat president Pat Riley has called Whiteside “our No. 1 priority, period.”

A general manager for another team said he fully expects Whiteside to receive a max deal, with a first-year salary of $22 million if the cap rises to $94 million as projected.

Dallas also plans to pursue Mike Conley in free agency, and they have the cap space to sign both players.

Timberwolves looking to trade Rubio after drafting Dunn
The Minnesota Timberwolves were rumored to be shopping point guard Ricky Rubio this offseason, and now, they aren't hiding those rumors.

After drafting Providence PG Kris Dunn with the No. 5 overall pick in the NBA Draft, the Wolves have officially put Rubio on the block, according to The Vertical's Adrian Wojnarowski:

Minnesota has been shopping Ricky Rubio throughout the week. His future in Minnesota is likely coming to an end.

New York was the team most interested in trading for Rubio, but that has faded after they acquired Derrick Rose in a trade with the Bulls.

Bulls to keep Butler?
Minnesota was involved in "advanced" talks to acquire Jimmy Butler in a trade with the Bulls, but talks fell apart when Chicago decided they didn't want to trade Butler just one day after sending Rose to the Knicks. Now, they plan to keep him for good and are taking him off the trade block, according to ESPN's Ramona Shelburne.

Word is Bulls were listening on Jimmy Butler, but not shopping him. Teams ALWAYS listen. Boston made the strongest push for him, but for now I'm told he stays.

Bulls general manager Gar Forman denied the team was ever shopping Butler and are "very happy" to have him. Butler averaged 20.9 points, 5.3 rebounds and 4.8 assists per game last season.