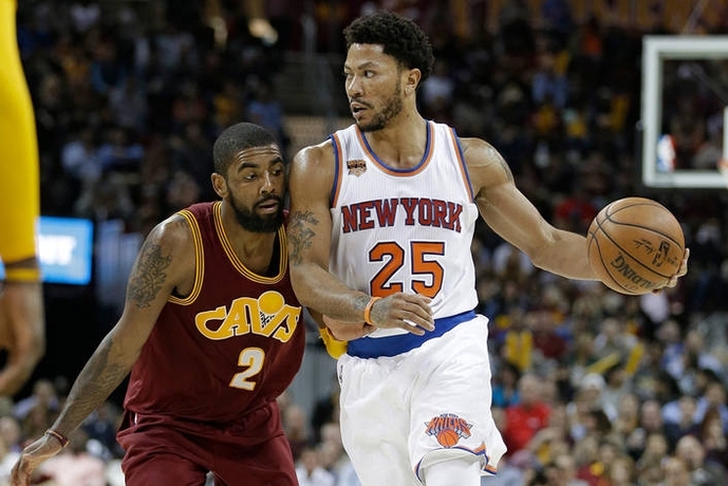 As the Cleveland Cavaliers continue to take offers for Kyrie Irving, other teams around the NBA are gearing up for the start of the new year. The offseason is about to reach a quiet point, but there is still plenty of rumors to sort through around the league - particularly with the futures of Irving and Carmelo Anthony. Here are all the latest NBA rumors you need to know.

Derrick Rose wants Cavs to keep Kyrie Irving
Derrick Rose signed with the Cavs for the veterans minimum earlier this month and is expected to serve as Irving's backup - unless he gets traded, of course. Some think that having Rose, a former league MVP, makes it easier to trade Irving so Rose can have the starting job, but that's now what he wants.

According to Marc Berman of the New York Post, Rose wants Cleveland to keep Irving and to serve as his backup.

That the disgruntled Irving has put the Knicks on his wish list is stunning. According to [agent B.J.] Armstrong, Rose hopes Irving stays put as Rose is content to be his backup.

“What player doesn’t want the best teammates he can have?’’ Armstrong said. “Derrick wanted to play with that team, Kyrie included.”

Stephen Jackson attempting NBA comeback
Former NBA player Stephen Jackson has not played in the league since the 2013-14 season, but the 39-year-old told Tom Osborn of the San Antonio Express-News that he is attempting a comeback.

Former Spurs guard Stephen Jackson is hopeful games like the one he had Sunday in Ice Cube’s Big3 League will help him get back into the NBA.

“I’ve been working to go back to the NBA, so this (league) is a blessing for me,” Jackson said. “I want to play basketball as long as I can. I feel like there are guys in the NBA who can’t guard me. I didn’t work out when I was in the NBA, but I’m working out as hard as I’ve ever worked out and I’m in the best shape I’ve ever been in,” Jackson said.

But the Houston native acknowledged a return to the NBA is a long shot.

“I ain’t putting all my eggs in one hat,” he said. “I know what people think of me, and that’s probably kept me out of the game. But as long as I’m playing and am around people I respect and am able to play the game, I’m cool. If it happens, it happens. If it don’t, I love where I’m at.”

Jackson won the NBA title in 2003 with the San Antonio Spurs and averaged 15.1 points and 3.9 rebounds per game in his 15-year career.

The Clippers signed Gallinari to a four-year, $65 million deal this offseason and got him in a sign-and-trade with the Denver Nuggets.