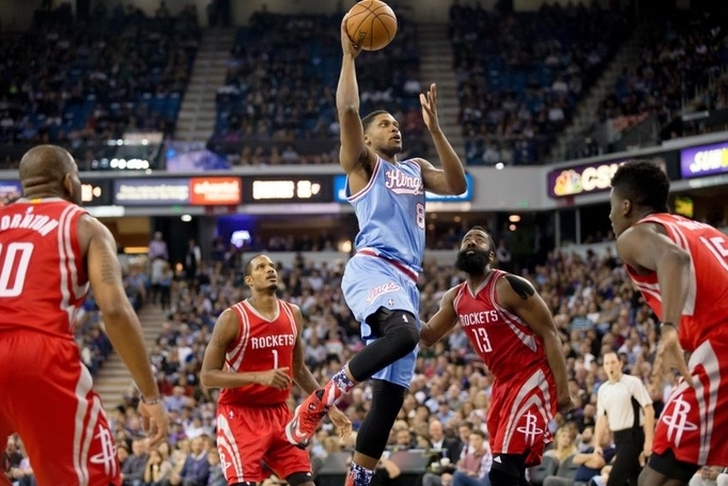 Rockets interested in Gay
Rudy Gay has told the Kings that he would like to be traded, and the Houston Rockets have expressed interest making a trade for him, reports Steve Kyler of Basketball Insiders:

The problem with trading Gay, who is owed $13.333 million this season, is that the Kings would have to take back some level of salary in the deal and find a team open to taking on Gay in what could be a one-year rental. The next hurdle is value. League sources say while there are teams that have expressed interest in Gay – most notably the Houston Rockets – getting anything of real value back on what could be a one-year rental at Gay’s price tag is hard math to make work.

There is a sense among league insiders that the Kings are not looking for a ton in return for Gay, so that may make finding a deal a little easier even with all the issues surrounding a deal.

Gay has also expressed interest in joining the Miami Heat, butt hey have yet to reciprocate that interest. He averaged 17.2 points and 6.5 rebounds per game last season.

Kings won't extend McLemore
The Sacramento Kings can negotiate a contract extension with guard Ben McLemore before the Oct. 31 deadline, but Bobby Marks of The Vertical reports that is very unlikely to happen:

Former lottery pick Ben McLemore, drafted in 2013, is in the final season of his contract and is eligible to have his rookie contract extended until Oct. 31.

Expect little progress on extension talks because McLemore has been on the trade block for more than the past year.

McLemore has a $10 million cap hold next summer.

Cavs offer to J.R. Smith
The Cleveland Cavaliers finally re-signed LeBron James on Thursday, inking him to a record-breaking three-year, $100 million deal. Now, they've turned their attention to re-signing J.R. Smith, and neither side is apparently too worried about it. Kyler reports that Cleveland has a standing offer on the table:

League sources said that Smith and his camp were not overly concerned about reaching a deal, with a belief that the Cavs have put a multi-year offer in the $10 million per year neighborhood on the table weeks ago. They added that Smith and his advisors have been looking for a slightly bigger offer and that waiting things out was simply about leverage and trying to get a slightly better deal.

Cavaliers sources also point out that once Smith and teammate LeBron James sign, the team will be locked into luxury tax status – which would make trades or roster moves slightly more difficult.

The sense from sources close to all of this was that Smith and the Cavaliers will reach a new deal, it just might not happen until closer to camp once the Cavaliers are sure there isn’t another roster move to be made.