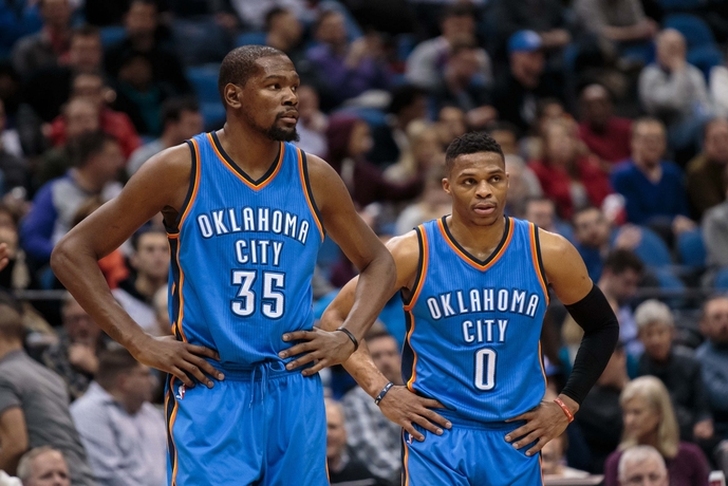 The NBA preseason gets started today, as the Golden State Warriors will take on the Toronto Raptors in Vancouver. However, there are a few notable trade rumors floating around as well as questions surrounding the health of a few stars. Here are the latest NBA rumors you need to know:

Motiejunas, Rockets "not close" on deal
The Houston Rockets expect to use forward Donatas Motiejunas in an increased role this season, but they still have yet to re-sign restricted free agent - and it doesn't seem like that will happen anytime soon, according to ESPN's Calvin Watkins:

Motiejunas is seeking a larger financial deal from the Rockets, but the two sides haven't had serious contract discussions in a month, the sources said.

Motiejunas' $4.4 million qualifying offer from the Rockets expires at midnight Sunday. His agent, B.J. Armstrong, told ESPN he gave the Rockets a Saturday deadline to work out a deal for him.

Durant, Westbrook "never valued each other"
Even since Kevin Durant left the Oklahoma City Thunder to sign with the Warriors, we are learning more about the relationship (or lack thereof) he had with fellow superstar Russell Westbrook during their time together. While appearing on The Vertical Podcast with Woj, former teammate Kendrick Perkins said the duo never valued each other:

"I think to me, what happened was with Russ and KD, I think they never really valued each other like that should have. And not saying that they didn't value as, like, didn't like each other. What I'm talking about is, I don't think they ever realized and said, hey - I don't think Russ ever realized and said, 'Hey, man, I got Kevin Durant on my side. We could take over this league.' And I never thought KD did vice versa. He never said, 'Hey, I got Russell Westbrook on my side.' You got two of the top five players in the NBA on the same team. And I just think that they never valued each other, and trust me - I'm telling you this right now - when they think about this 10 years later, they're gonna regret that. They're gonna regret that they didn't value each other the way that they should have. And I'm talking about both of them. And I ain't saying they didn't like each other, because it wasn't none of that. I mean, we all played cards, they laughed and joked, we all had conversation. We had a group text going about Redskin and Cowboys football, because it was all good.

"I think what it was was this. Let me correct that. I think what it was was this. Russ actually did value KD as being the player that he is. But what I had to explain - and I explained it to KD - is that what you have to understand about Russ is that Russ, at the time, he wasn't getting the credit of being on the same level as KD, but he had the potential. The whole thing was is that, I thought out of all that, it never really came down to those two guys that got in the way of each other. It always was the outside that got in the way of both of them...

"It was always the outside. It was always a controversy of whose team it was. Why it just can't be both of y'all's team? How about Russ goes for 50 one night, you go for 60 the next night?"

Clippers "committed" to keeping Griffin, Paul
The Los Angeles Clippers are facing a crucial season as both Chris Paul and Blake Griffin can be unrestricted free agents after the year, and both players have been linked to several other teams. However, ESPN's Ramona Shelburne reports that the team is will to do whatever it takes to keep the duo:

So after three years of Ballmer's ownership, it might just be long enough to draw some conclusions. Most importantly, according to Clippers insiders, is his commitment to keeping both Griffin and Paul long term no matter what it costs.

Do both want to stay? That's impossible to predict nine months out. But it's hard to imagine either finding as good of a set up as they have in Los Angeles. Both have firmly planted roots in L.A., with deep ties to the business and entertainment worlds. Paul has essentially become a CEO-in-training, befriending executives he does business with and those who frequent Clippers games; Griffin is a superstar pitchman and budding comic.

Rivers has already publicly said the team isn't trading Griffin at least a dozen times now. It's heresy to even bring up trading Paul. Jordan has turned into the best defensive center in the game, and he's locked up on a very reasonable contract for two more seasons.

So while this is still a pivotal season for the Clippers' core group, it's probably not their last stand.