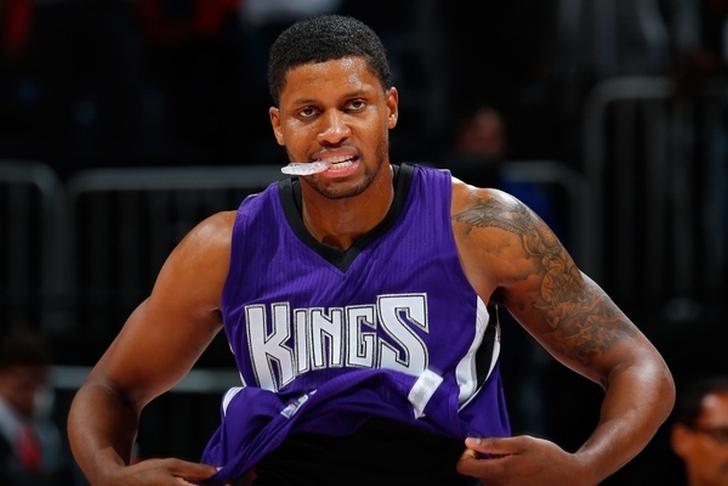 Potential Rubio-Gay trade
The Sacramento Kings are actively trying to trade Rudy Gay, who has expressed his frustrations with the franchise. Several teams have expressed interest in Gay - namely the Rockets - but the Minnesota Timberwolves have also emerged as a possible destination, according to Hashtag Basketball's Nick Agar-Johnson.

One potential trade option for the Kings, although an unlikely one, would be Ricky Rubio. Rubio's name has been in the rumor mill recently after the Timberwolves drafted Kris Dunn at #5 overall, and Minnesota may be looking to move on from the Rubio era. Ricky has shot 36.8% from the floor during his five-year career, and his shooting woes both at the rim and from the outside allow opponents to sag off him defensively and pressure opposing players.

However, Rubio is an excellent defender who has led the league in steal percentage in three of the last four years. He would be an instant boost to a Kings defense that had serious trouble guarding anyone on the perimeter last year. Rubio is also an incredible passer, and would instantly become the best pick-and-roll point guard that DeMarcus Cousins has ever played with.

In turn, Rudy Gay would be a good fit for the Timberwolves as a small-ball 4. He would boost an already strong Timberwolves transition offense, and could play alongside multiple Timberwolves lineups: he could play small forward alongside Gorgui Dieng and Karl-Anthony Towns, and also slot into a lineup with Wiggins at the 3 and Zach LaVine at shooting guard.

Minnesota has also expressed interest in trading Rubio, who has told the team he wants to be dealt if they don't make the playoffs this season.

Smith only looking at Cavs
J.R. Smith has not re-signed with the Cleveland Cavaliers yet, but he doesn't plan on going anywhere else. According to Steve Kyler of Basketball Insiders, Smith is not looking to sign with another team:

My understanding is JR is only looking at the Cavs. They just have not reached a deal yet. https://t.co/gUKRn9vLYY

The Cavs have reportedly offered with a multi-year deal worth around $10 million per year, but Smith is hoping to get more money from them. He averaged 12.4 points and 2.8 rebounds per game last season.

Bucks interested in Allen
Retired sharpshooter Ray Allen has reached out to the Milwaukee Bucks and Boston Celtics about making a NBA comeback, and the Bucks have reciprocated that interest, according to Woelfel's Press Box:

The Bucks appear to be more than a tad interested in Allen, the Hall of Fame in-waiting shooting guard who played his first 6½ seasons in the NBA with the Bucks. In an interview with WSSP (105.7 FM), Bucks president Peter Feigin acknowledged the Bucks wouldn’t mind having Allen’s services.

Feigin said, “Ray Allen lights everybody up,’’ and that “He (Allen) has been talking to (Bucks GM) John Hammond.’’ Feigin also added, “Ray Allen is someone who gives this entire organization a great shot in the arm.’’