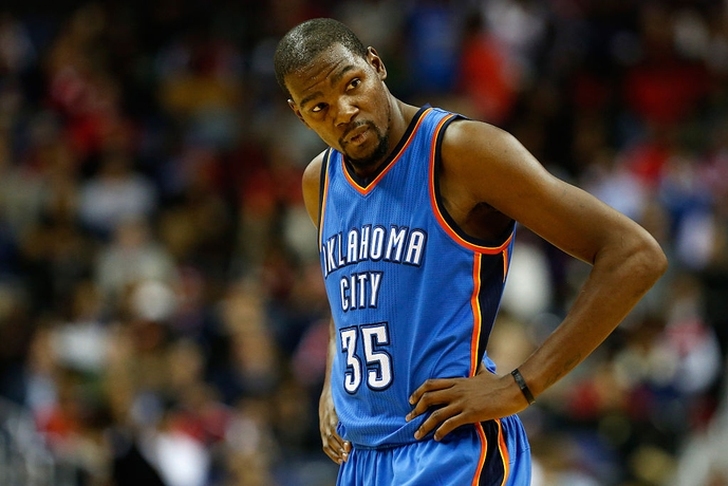 The Cleveland Cavaliers are still reveling in winning the NBA title, but the rest of the league has turned their attention to Thursday's NBA Draft and their preparations for the start of free agency on July 1. Check out the latest NBA news and rumors below:

Durant to Warriors?
Kevin Durant's impending free agency has been one of the biggest topics in the NBA over the past year and a half, but many expect him to re-sign with the Thunder - at least for one year. However, the Warriors are the only other team he's seriously considering signing with, reports Frank Isola of the New York Daily News.

The same source maintains that if Durant doesn’t re-sign with the Oklahoma City Thunder he would prefer to join the Warriors, a team that has reached two straight NBA Finals and could rule the Western Conference for the next five years if Durant goes to the Bay Area.

Free-agent-to-be Harrison Barnes was dreadful in Games 5, 6 & 7 and Golden State’s offense imploded down the stretch of Game 7. The Warriors scored 13 fourth-quarter points and missed their last nine shots, including five from Curry. They needed a viable scoring option in their half-court sets and that would be Durant, a match-up nightmare for just about every opponent.

Durant will meet with teams in Los Angeles once free agency begins. He averaged 28.2 points, 8.2 rebounds and 5.0 assists per game this season.

Golden State also pursuing Dirk Nowitzki?
If the Warriors strike out on Durant, they plan to pursue another top-tier player in Dirk Nowitzki, according to Tim Kawakami of the San Jose Mercury News.

Nowitzki, also a pending free agent, would be a next-tier discussion for the Warriors, and I'm told they have no idea if he'd be interested in leaving Dallas.

Nowitzki, 38, has said he intends to remain in Dallas, where has spent his entire career ... but he has left the door slightly ajar -- he's a little wary of staying in Dallas for a rebuilding process.

Would Nowitzki be interested in going for a championship in Steve Kerr's open offense, open atmosphere, and with a staff that includes special consultant/old buddy Steve Nash?

And how much would he want to be paid?

It's unknown. Might be impossible. But the Warriors are eager to find out -- that's if the Durant chase fizzles and maybe they'll even try to figure out a way to land both.