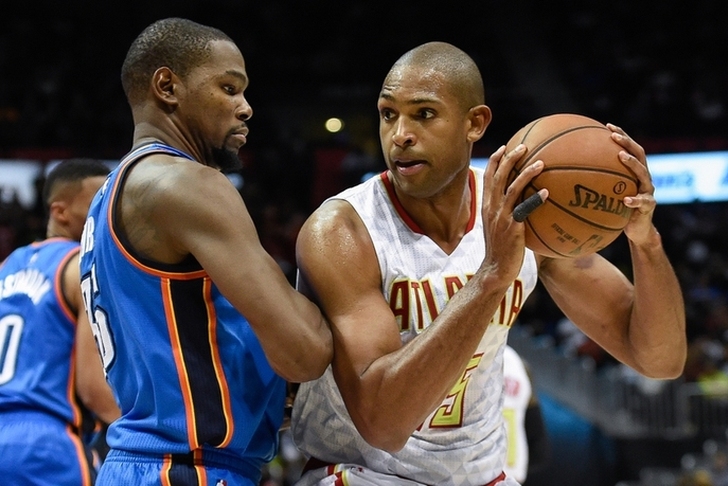 NBA teams around the league are making their final preparations for the start of free agency on July 1. With the rising salary cap, many players are due for significant pay raises - and virtually every team has cap space. Check out the latest NBA news and rumors below:

Thunder making cap space for Horford
Oklahoma City made the surprising move of trading Serge Ibaka to the Magic on draft night, but they may not be done making big moves. In an effort to continue to improve their roster while appealing to Kevin Durant, the Thunder are working to create enough cap space to sign Al Horford, reports ESPN's Brian Windhorst.

As they prepare to make their pitch to Kevin Durant, the Oklahoma City Thunder have been making calls around the league looking to clear a massive amount of salary-cap space in a move rival executives believe is an effort to go after free agent Al Horford in addition to Durant, multiple sources told ESPN.com. Horford played for Thunder coach Billy Donovan at the University of Florida, where they teamed up to win two national titles, and they remain close. The Thunder have an opening at power forward after trading Serge Ibaka to the Orlando Magic last week.

In order to make the room, OKC has discussed trading both Enes Kanter and Kyle Singler. They are also expected to waive Anthony Morrow, who's contract doesn't become guaranteed until July 15.

At least eight other teams are also pursuing Horford, with the Celtics, Hawks, Heat, Lakers and Wizards considered to the the frontrunners with the Thunder.

Knicks to sign Noah, Gordon?
The New York Knicks have long been considered to be one of the favorites in the Joakim Noah sweepstakes, but now, it appears to be a foregone conclusion that he will end up in the Big Apple. Via Marc Berman of the New York Post:

The Knicks have emerged as prohibitive favorites for Joakim Noah and have set up a Friday afternoon meeting with the free-agent Bulls center, according to an NBA source.

With the Wizards having interest, the Washington Post reported Wednesday Noah is expected to choose New York, with a starting salary that could be $18 million. Rose said last week he had already started recruiting his former Bulls teammate, saying he wants to play with him. It was previously reported Noah would not make his decision based on the highest bidder.

New York is also looking to find a starting shooting guard on the open market, and that search has led them to Eric Gordon, according to Berman.

According to a source, the Knicks have interest in injury-prone Eric Gordon, too. Rose wouldn’t mind seeing Gordon get to New York. They played AAU ball together in Chicago and are friends.

Grizzlies targeting Parsons
Memphis is looking to improve on the wing in free agency as they try to get back to being a contender in the Western Conference, and Chandler Parsons has emerged as a top target for them, according to ESPN's Marc Stein:

Free Agent Rumble: Memphis not only believes it'll keep Mike Conley but might try to sign Chandler Parsons away from the Conley-chasing Mavs

Parsons is seeking a max deal, and the Mavericks have said they won't offer that to him. Dallas plans to offer max contracts to both Hassan Whiteside and Mike Conley on Friday, when they meet with both players. However, Conley would prefer to re-sign with the Grizzlies - as long as they're committed to improving the roster. Parsons would certainly be a step in the right direction.