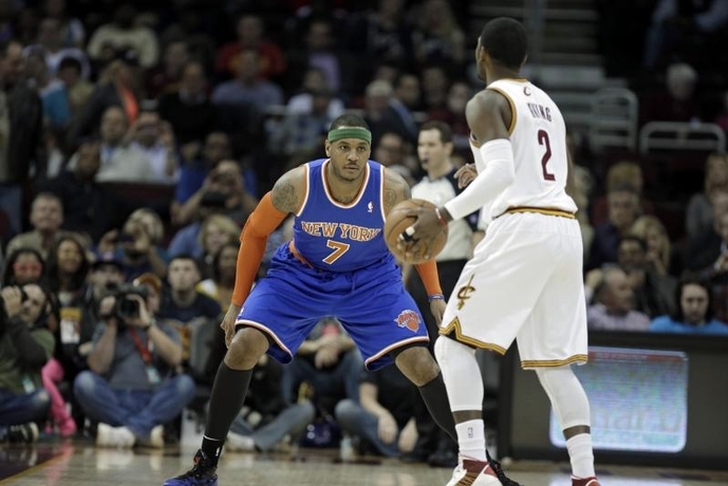 The NBA offseason has reached a quiet point with free agency essentially over, but there are two major storylines that have dominated headlines throughout the summer. The Cleveland Cavaliers are still evaluating trade offers for Kyrie Irving and questions remain about Carmelo Anthony's future with the New York Knicks. Here are the latest updates on those two stories and other NBA rumors you need to know:

Knicks won't trade Carmelo Anthony to Rockets
Carmelo Anthony has told the Knicks that he would only waive his no-trade clause for the Houston Rockets, but New York is unlikely to adhere to his request because they don't like what the Rockets can offer them, according to Steve Kyler of Basketball Insiders.

With the Knicks front office situation settled, the prevailing thought in NBA circles is that the Knicks are not going to agree to the long-rumored trade with the Houston Rockets. The commentary coming out of New York is that a Houston deal offers nothing of real value to the Knicks and moving Carmelo simply to take on contracts and players they do not want or view as pieces of the future is not appealing or agreeable to Knicks leadership.

The Knicks at this point seem like they will bring Anthony to training camp if he will not expand his list of agreeable trade destinations or unless the return through Houston changes to their favor.

Carmelo has told the Knicks that he does not want to play for them after he was reportedly convinced that he would be traded to the Rockets earlier this offseason. Now, he doesn't want to settle for anything else.

Cavs have no sense of urgency to find Kyrie Irving trade
The Cavs are continuing to take offers for Irving, but they are in no rush to trade him and will wait until they get an offer they really like, according to Kyler.

The Cleveland Cavaliers are not operating with any sense of urgency on finding a Kyrie Irving trade. League sources say they are continuing to field calls and talk through ideas, but that there is no sense of closure on the situation looming. In fact, there does not seem to be much urgency in how the Cavs are approaching the situation at all.

One source whose team has been trying to find a way to deal for Irving said this week that there does not seem to be anything of a deadline for the Cavs to make a decision. While the Cavs have been very focused and professional in their talks, this particular team did not have any sense of where they stood in the Cavs process, describing them as in “fact finding mode,” not necessarily deal making mode. That can always change quickly, but there doesn’t seem to be much urgency to find closure.

The Phoenix Suns have emerged as the frontrunner for Irving but only want to make a deal if Irving will commit to them long-term.

Phoenix's offer for Irving centers around Eric Bledsoe, but Cleveland is also seeking a promising young player and a first-round pick from them. The Cavs are interested in both Devin Booker and rookie Josh Jackson, but the Suns are unwilling to part with either player - though they may give up Jackson if Irving does agree to sign an extension with them.

Westbrook arrived in OKC late Wednesday night, but a source told The Oklahoman that the trip is not so he can sign a contract extension.

Though Westbrook spends much of his summer at his home in Los Angeles, he makes periodic offseason trips to Oklahoma City. There’s no expectation that this one is to sign the extension.

Westbrook has until the start of the season to sign the extension. If he doesn't, he can opt out of his contract after the season to become an unrestricted free agent.

If he doesn't sign an extension, the Thunder may explore trading him to get something in return for Westbrook, hoping to avoid another Kevin Durant-type situation where they could lose him for nothing in free agency.