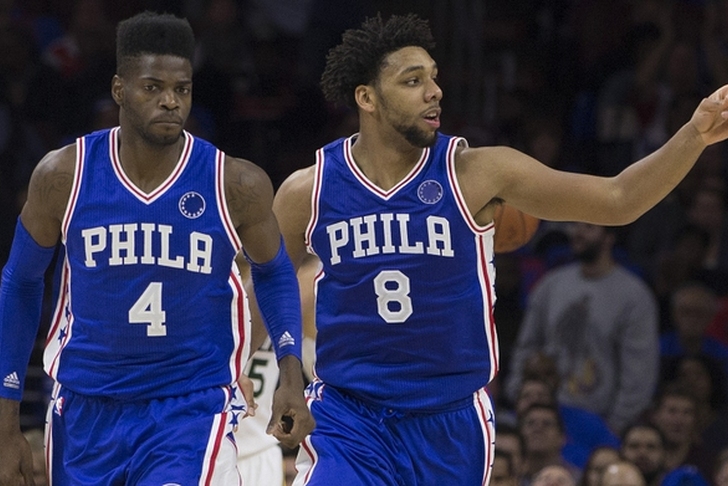 As the NBA playoffs build towards the Finals, most teams across the league are getting a head start on their offseason plans ahead of next month's draft. Several squads are also keeping an eye on upcoming free agents, and are preparing their pitches to hopefully sign some of the league's best players. Here's all the latest NBA news and rumors you need to know:

Sixers to trade Okafor, Noel
The Philadelphia 76ers have a logjam of big men on their roster with Jahlil Okafor, Nerlens Noel and Joel Embiid, and their expected draft pick of Ben Simmons would only add to the mix. As a result, ESPN's Chad Ford reports that the Sixers are looking to trade either Okafor or Noel:

I think that there's a very high likelihood, that whether it's to move up in the draft or use them to grab a free agent in a sign and trade or just to a trade, that you will not see the Nerlens Noel-Jahlil Okafor pairing at the start of next season. I think that they'll gauge the interest of both players. I think that there might be a slight preference for Noel, to keep him around with the Sixers, and I think you might be right, there might be a slight, better value for Okafor out on the market, but I think everyone agrees that that combination of those two players doesn't necessarily work.

The Sixers needs to pick up assets, especially if they're gonna go ahead and do a Ben Simmons or Brandon Ingram with the first pick in the draft. Then they're gonna need those assets to start to fill out their backcourt, because the 24th pick and [the 26th pick], you're not finding starters. I'm not even sure that you're necessarily finding rotation players at that back end of the draft that are gonna make big impact, so they're gonna have to do that via free agency or via trade, and I think either Okafor or Noel — I don't think they'll trade both — but one of those two is probably their best trade chip.

Knicks looking to trade for draft pick, targeting Selden or Ferrell?
New York doesn't have a single draft pick this year, but they've still been scouting prospects and have apparently identified two they like. According to ESPN's Ian Begley, the Knicks want to trade into the draft to pick Kansas SG Wayne Selden or Indiana PG Yogi Ferrell:

The Knicks plan to acquire a pick in June’s draft. The best-case scenario would probably be a late first-round pick but second-round is more likely.

The club has shown interest in several players in recent weeks, including Indiana guard Yogi Ferrell, who has a workout scheduled with the club next month. New York also interviewed Kansas guard Wayne Selden at the NBA Draft Combine in Chicago and has expressed interest in him as the draft approaches, according to league sources.

Selden, a 6-6 guard, would fit the mold of the big guards Phil Jackson used in his Chicago Bulls and Los Angeles Laker teams. Ferrell, a 6-0 guard, has impressed in workouts, according to sources, and was the only point guard last season to average 17 PPG, 5.5 assists and shoot at least 40% from 3.

Wizards to offer max deal to Beal
Washington shooting guard Bradley Beal declared earlier this week that he will seek a max contract in free agency this summer, and it appears he'll get his wish. According to the Washington Post, the Wizards will offer Beal the max to keep him in town.

Beal is set to be a restricted free agent this summer, meaning the Wizards could match any offer he receives from another team.