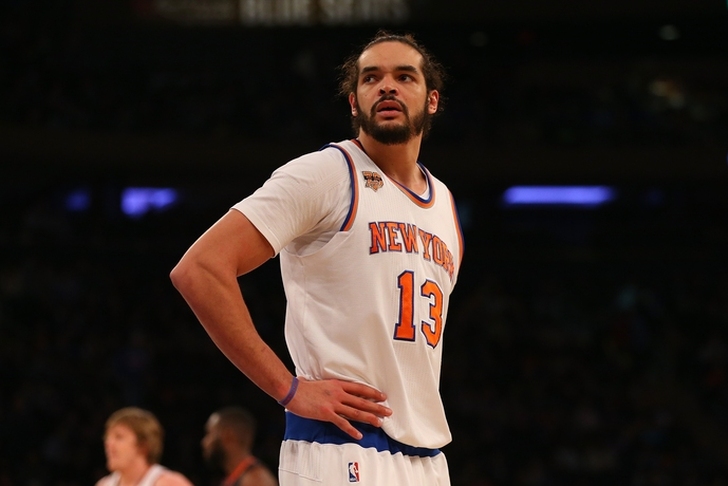 The NBA season is churning right along as we approach the quarter-point of the season, and the Boston Celtics have established themselves as a legitimate title contender following their victory over the Golden State Warriors last night. Meanwhile, a number of teams that have also gotten off to good starts are looking to trade for another quality player or two in an attempt to jump into that contender category. As such, we have some trade news - and an unfortunate injury - in today's NBA Rumors Roundup.

The Knicks will need to at least showcase Noah if they have any chance of dealing him to a title contender gambling for defensive help off the bench.

Perhaps their only hope is Minnesota president/coach Tom Thibodeau, who guided Noah when he was first-team All-NBA for the Bulls in 2014.

The Knicks are in no rush to use the stretch provision and waive Noah, which probably is where this eventually ends up.

Noah has been scratched each of the last two games after returning from his 20-game suspension due to New York's logjam at center with Enes Kanter, Kyle O'Quinn, and Willy Hernangomez. He averaged 5.0 points and 8.8 rebounds in 22.1 minutes per game last season.

Nuggets "confident" they can trade for star player
The Denver Nuggets are trying to add another star player to their roster in hopes of competing with the top teams in the West, and even after striking out Kyrie Irving and Paul George this offseason - as well as Eric Bledsoe earlier this month - they remain confident they can land a "disgruntled" star before the trade deadline, according to ESPN's Zach Lowe.

"We chase every opportunity to improve ourselves," Nuggets president of basketball operations Tim Connelly said. "We've had a lot of excellent players offered to us for our young talent. There's a fine line between overvaluing your own players and being too aggressive chasing short-term results."

They are confident they still have the goods to butt into trade talks for the next disgruntled star. That is uncertain. Bit players like Juancho Hernangomez and Malik Beasley have value, but they aren't blockbuster centerpieces. Denver is out of extra first-round picks after coughing one up to dump JaVale McGee, and tossing another into the Plumlee-Jusuf Nurkic deal -- an overpay.

Denver is currently 8-6 on the season, which ties them for 5th in the Western Conference with the Portland Trail Blazers.

Grizzlies say Mike Conley will undergo therapy and treatment to help promote healing and alleviate soreness in his left heel and Achilles after consultations with physicians and the medical staff. There is no timetable for his return at this time.

Losing Conley is a tough blow for the Grizzlies, who have lost six of their last eight games after starting 5-1. Conley is averaging 17.1 points, 4.1 assists, and 2.3 rebounds per game so far this season.