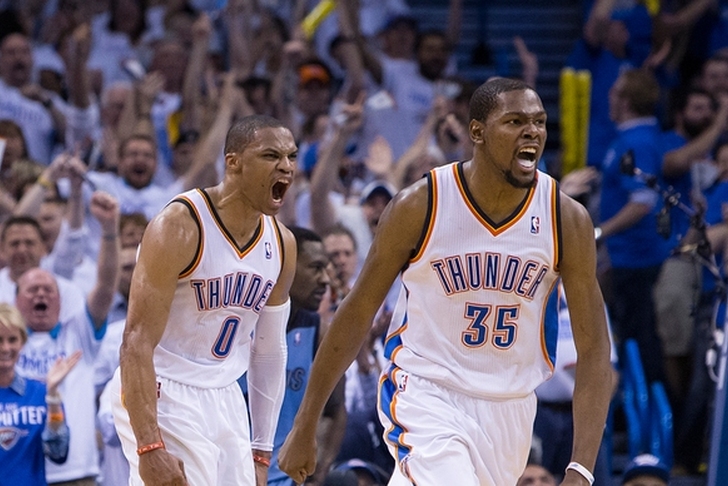 We're just a few weeks away from the NBA Trade Deadline, which means there's plenty of rumors to sift through as teams look to either bolster themselves for a playoff run or punt on a lost season. With that in mind, here's our NBA Rumors Roundup For January 31st. The Los Angeles Lakers' interest in signing Kevin Durant this coming summer has been well documented, but what happens if they actually do hit the NBA's version of the Powerball and land the perennial MVP candidate?

According to ESPN's Stephen A. Smith (via Lakers Nation's Ryan Ward), the next step could be signing Durant's running mate, Russell Westbrook, in 2017:

There's also speculation out there that Durant could signing a one-year sheet with the Thunder next year, entering free agency in 2017 with Westbrook in hopes of finding a package deal. It's all in the spectrum of rumor at this point, but stay tuned.

New Orleans Pelicans forward Ryan Anderson is going to be a key cog in the 2016 NBA Free Agency machine, considering his length and deadly range as a three-point specialist.

One team who could be a major player for Anderson this offseason is the Brooklyn Nets -- a team in desperate need of knockdown shooters on the perimeter. The Nets drafted Anderson with the 21st pick of the 2008 NBA Draft, but traded him away the next offseason to the Orlando Magic.

“Well, they traded me away, so,” Anderson told The Bergen Record when asked about Brooklyn as a potential destination. “No, I think they’re a great team. They have a lot of great potential. For me, it’s just not really on my mind right now. That’s so far from now, and so many different things can happen.”

One thing the Nets have working in their favor is Anderson's close friendship with star center Brook Lopez.

“He’s one of those friends where no matter how long it’s been, you catch up immediately,” Anderson said about Lopez. “I don’t think we’ve ever had a basketball conversation in our lives. … You imagine a basketball player — all they talk about is basketball — so I kind of connect and draw toward the guys that have more substance.”

Knicks Looking For A Point Guard

The New York Knicks are gathering themselves for a run at Kevin Durant in free agency this offseason, with the focus right now being the search for a point guard that'll pique his interest when negotiations finally get underway.

We've already covered the team's trade interest in Atlanta's Jeff Teague, but another guy to keep in mind is Memphis Grizzlies court quarterback Mike Conley -- either through a trade or as a complementary free-agent signing this summer.

Via Marc Berman and Fred Kerber of the New York Post:

"Conley, who never has made an All-Star team and is not in the top 10 in voting among Western Conference guards, still remains the top point guard on the free-agent market this summer. Sources have indicated the Knicks and Nets will be all over Conley, as the New York squads are two of the few NBA teams in the market for a top-notch starting point guard."

With Conley set to hit the market and Memphis in need of a shot in the arm in a top-heavy Western Conference, don't be surprised if they dangle him in front of the Knicks in trade discussions.