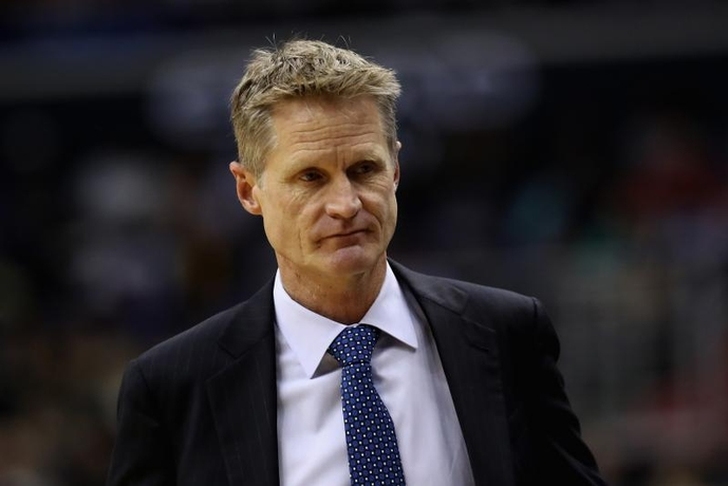 The NBA Playoffs are now in full swing as the first round starts to wind down, and injuries are already playing a major factor. While Blake Griffin is out for the remainder of the postseason, backup point guard Austin Rivers expects to return from a hamstring injury in Game 5. Other teams have already shifted their focus towards the offseason. Here's all the latest news and rumors from around the league:

Kerr's career in jeopardy
Golden State Warriors head coach Steve Kerr will not coach in tonight's Game 4 against the Blazers and could miss the rest of the playoffs with a back injury - but it could have more serious repercussions. According to Adrian Wojnarowski of The Vertical, Kerr's back issues may cause him to walk away after this season.

The discomfort has never truly left Kerr in the past two years, but the symptoms did become grudgingly tolerable – until now. Kerr will forever regret undergoing that failed back surgery in 2015, regret it for the toll the spinal fluid leakage has caused him with ongoing headaches and nausea.

Kerr missed the first 43 games of the 2015-16 season, and, now, Kerr fears he could miss the rest of these playoffs, too. Unless the agony dissipates, Kerr is prepared to let assistant coach Mike Brown coach game nights on the Warriors’ championship chase.

“I don’t know if he can do this very much longer,” one NBA associate close to Kerr told The Vertical on Sunday. “He hasn’t enjoyed this one bit. Even if we haven’t talked in a bit, I can see the pain on his face.”

...For now, Kerr wants to get to the end of the first-round series with Portland and see if the symptoms subside, see if there’s a way to be a basketball coach again. Whatever happens in the long run, Steve Kerr could live with walking away. His friends, his family, they worry about him. They want what he wants: the pain to go away, peace.

The Warriors are 40-4 in games without Kerr over the last two seasons. Assistant coach Mike Brown is taking over as the head man in Kerr's absence.

Hawks want Millsap back next season
Atlanta Hawks forward Paul Millsap can decline his player option to become a free agent this offseason, which he may do in order to sign a bigger contract. If he does become a free agent, the Hawks plan to re-sign him, according to owner Tony Ressler.

The team held on to their four-time All-Star at the NBA trade deadline despite a swing of strategy that went from just listening to potential offers to actively pursuing a deal before pulling him off the trade block altogether.

“We love Paul Millsap,” Ressler told The Atlanta Journal-Constitution last week. “We are trying to re-sign him. We want him to stay here. We think he is a really special player and a special person that we want on our team and in our locker room and we are going to make every effort imaginable to keep him.”

Millsap averaged 18.1 points, and 7.7 rebounds per game this season.

Celtics not interested in Carmelo Anthony
A report earlier this week indicated that several members of the Boston Celtics coaching staff wanted Boston to trade for Carmelo Anthony, and that they may pursue a deal this offseason. However, Stefan Bondy of the New York Daily News says that is not the case.

Multiple sources refute report that ANY Celtics coaches pushed to trade for Carmelo.

Anthony has a no-trade clause, but has expressed interest in waiving it if he was traded to a contender (namely the Clippers or Cavaliers). He averaged 22.4 points and 5.9 rebounds per game this past season.

Luol Deng expecting changes, may not be back with Lakers next season
The Los Angeles Lakers signed Luol Deng to a four-year, $72 million this past offseason, but he sparsely contributed this season. According to Mark Medina of the Los Angeles Daily News, Deng knows the franchise is going to make changes this offseason - one of which may be him leaving town.

“I believe there will be a lot of changes,” Deng said. “When changes happen, if I’m one of the changes that happen early, clearly I can’t see myself with any input on how I would fit in. But if I’m one of the late guys to be moved, I can always look at the team and have a discussion if we both agree we fit in better.”

Follow our NBA news page for all the latest NBA rumors!