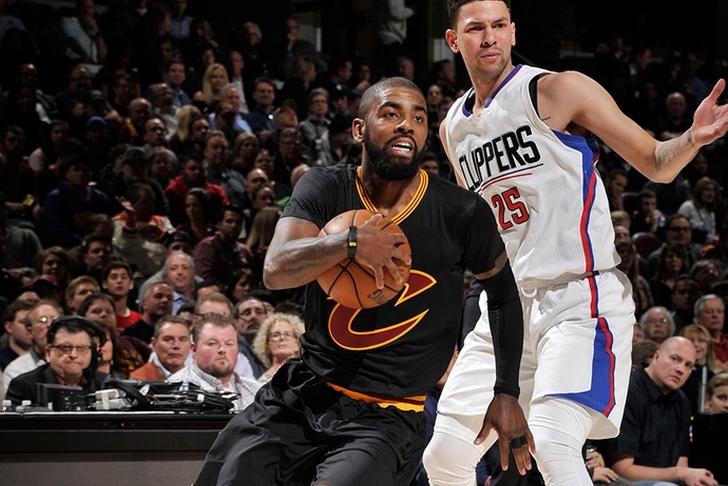 The NBA offseason has reached its quiet point after the free agency frenzy, but there are new developments in the Kyrie Irving trade saga that are keeping the league in the headlines. We are have an update on who former New York Knicks president Phil Jackson was trying to trade Kristaps Porzingis for. Here are all the latest NBA rumors you need to know.

Kyrie Irving interested in joining Clippers
The Phoenix Suns are the frontrunner to land Irving in a trade, but he has also been heavily linked to the Knicks. That is thought to be his preferred destination as he grew up in the New Jersey area, yet that doesn't appear to be the case.

Veteran basketball writer Peter Vecsey told Alex Kennedy on the HoopsHype Podcast that if Irving has his way, he'll be traded to the Los Angeles Clippers.

“He loves L.A. and he’s been working out there a lot this summer," Vecsey said. "Do they have the assets they get him? I don’t see how. But they also have Jerry West and he’s been able to figure out before … the Lakers didn’t have the assets to get Shaq and he wheeled and dealed and figured out and they got him … he was able to get Kobe for Divac in the draft.”

The Clippers pulled out of talks with the Cavs two weeks ago, as they didn't think they had the assets to get a deal done. Cleveland set an asking price of a proven veteran, promising young player and a first-round pick for Irving.

Irving didn't speak to Cavs teammates for days at a time during playoffs
In more Irving news, the discord between him and team apparently goes back to last season. ESPN's Dave McMenamin told the BBall Breakdown podcast that Irving began to distance himself from his teammates during the postseason and would go days without speaking to anyone associated with the team.

"I’m not sure. Phoenix, of course, hired (former Cavalier) James Jones this offseason,” McMenamin said. “He’s been inside that locker room. He saw Kyrie Irving in the playoffs this year — in between the first round when they beat Indiana and the second round when they played Toronto — go consecutive days without speaking to a teammate at practice. On that stage.

“It’s one thing for people to go through your ups and downs during the regular season. But when you get to the playoffs, the main thing is the main thing, and we’re brothers, and we’re pulling together to get this thing done. Even at that level, there were things that made him sullen or reclusive from his teammates.”

He also discovered that James had asked Cleveland to trade him for Chris Paul after the Cavs won the title in 2016 and that Cleveland was including him in trade talks for Paul George and Jimmy Butler this offseason.

All of those factors ultimately led to him demanding a trade.

During his appearance on the HoopsHype Podcast, Vecsey said that Jackson was angling to deal Porzingis to the Boston Celtics for the No. 1 pick so he could draft Lonzo Ball.

“People knew, they probably wouldn’t have accepted, but Phil was angling to try and trade Porzingis for the No. 1 pick to Boston and he would have taken [Lonzo] Ball. That’s who he was after. In the end, people might really like that.”

Boston was at the forefront of trade talks for Porzingis but the two sides ultimately couldn't come close to a deal.

The Celtics ended up trading the pick to Philadelphia 76ers for the No. 3 pick and a first-round pick in 2018. Philly selected Markelle Fultz with the top pick, while Ball went to the Los Angeles Lakers at No. 2 and Boston took Jayson Tatum at No. 3. It's unclear if the Knicks had talks with the Lakers about a deal for that second pick.

New York ended up drafting French point guard Frank Ntilikina with the No. 8 pick in the draft.