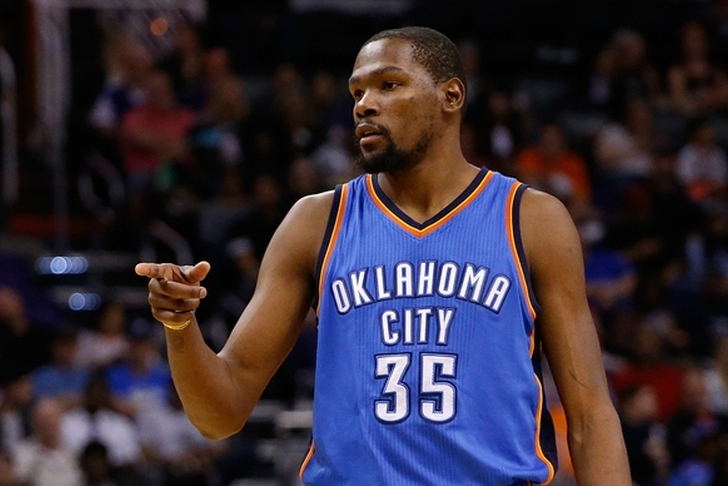 With the NBA Draft now in the rear-view mirror, teams are turning all of their attention to the start of free agency on July 1. Every team has cap space with the increased salary cap, and most teams are planning to go after the top players available on the open market. Check out the latest NBA news and rumors below.

Thunder the favorite for Kevin Durant, will only sign one-year deal?
Durant has set up meetings with six teams - Celtics, Clippers, Heat, Spurs, Thunder and Warriors - for July 1, but only one of those teams has a shot at signing him this season. According to The Vertical's Adrian Wojnarowski, Durant will sign a one-year deal with the Thunder, and the meetings with the other teams are just a prelim for when he hits the open market next year:

.@WojVerticalNBA says teams meeting with Kevin Durant feel they're laying groundwork for '17 FA since they all anticipate his return to OKC.

.@WojVerticalNBA envisions Kevin Durant returning to #Thunder for 1+1 deal, then taking longer view of future when up with Westbrook in '17

Durant has been expected to sign a one-year deal (with a player option for the second year) with the Thunder for two reasons - the ability to take advantage of the salary cap rising again next season, and to decide his playing future with teammate Russell Westbrook, who will also be a free agent after next season.

Carmelo Anthony pitching Durant on Knicks
The Knicks have been hoping to pursue Durant this offseason, but he doesn't seem to be interested since he has no meeting planned with the team. However, that doesn't mean he won't be hearing their recruiting pitch. ESPN's Marc Stein reports that Carmelo Anthony is doing his best to talk to Durant about joining the Knicks while both play for Team USA at the Olympics this summer:

New York Knicks star Carmelo Anthony told ESPN on Monday that his recruitment of marquee free agent Kevin Durant has already begun and will not be affected "whether he meets with the Knicks or not."

‎"I'm with KD now; he's right downstairs," Anthony told ESPN in an interview that will air later Monday on SportsCenter. "We've been together. We've been talking.

"I do consider myself part of the Knicks," Anthony continued, "so that meeting has already taken place."

New York wasn't expected to make a serious run at Durant, but they have ramped up their pursuit after acquiring Derrick Rose.

Conley souring on Spurs?
Mike Conley is the top point guard available on the open market this summer, and the San Antonio Spurs were one of the leading candidates to sign him away from the Memphis Grizzlies this summer. However, according to SB Nation's Tim Cato, Conley is starting to have reservations about joining the Spurs:

on @1033fmESPN, @espn_macmahon said a source told him that Mike Conley has serious worries about going to the Spurs because of Tony Parker

This news came just hours after the Grizzlies released a short film about Conley, undoubtedly to help their recruiting pitch in keeping their star point guard:

ICYMI: Watch the @memgrizz premiere. A film by Craig Brewer. Our Conductor.https://t.co/Ylab5VNJcz

Along with the Grizzlies and Spurs, Conley is being heavily pursued by the Dallas Mavericks. He averaged 15.3 points and 6.1 assists per game last season.

Hornets losing Lin?
Jeremy Lin had an excellent season as the sixth man for the Charlotte Hornets last year, but that that's mean he'll be back. According to ESPN's Chris Broussard, the Hornets are unlikely to re-sign him due to a lack of cap space.

The Charlotte Hornets would like to re-sign free agent Jeremy Lin but are fearful of losing the point guard, according to league sources.

The Hornets' top priority is bringing back Nicolas Batum, their free-agent swingman who had a breakout season, and they also want to re-sign Marvin Williams, who is a strong presence in the locker room, sources said.

Because Charlotte doesn't own Lin's Larry Bird Rights, those deals are likely to eat up the cap space the team would need to retain Lin.