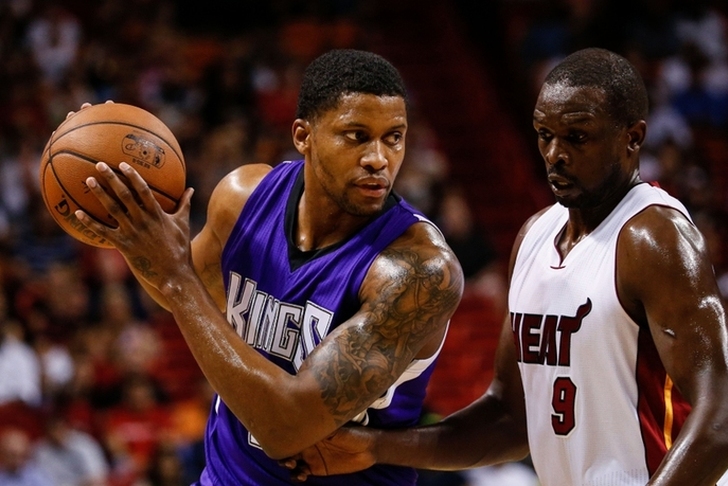 Heat to add Gay?
The Sacramento Kings have placed Rudy Gay on the trade block this offseason, but no one has been biting - yet. According to Barry Jackson of the Miami Herald, Gay is trying to work his way to the Heat:

According to an associate, the Heat is among teams that very much appeal to Sacramento forward Rudy Gay, who has been available in trades. But Miami likely lacks the tradable assets to acquire him if it wanted to and his $14.2 million player option for 2017-18 is worrisome. Players signed this month in free agency cannot be traded until Dec. 15.

Pistons plan to extend Caldwell-Pope
The Detroit Pistons have a promising young core of players centered around big man Andre Drummond, and shooting guard Kentavious Caldwell-Pope has proven to be a valuable member of that group. With his rookie contract set to expire after the season, Pistons owner Tom Gores told Vince Ellis of the Detroit Free Press that they will sign KCP to an extension - even if they have to go over the salary cap to do so:

“Look, if we weren’t building a core, there’s really no point in paying the luxury tax. Because we are building a core, would I do it? Yeah, absolutely. This is a tremendous team. If you go down the line, player by player, and especially our young folks, these are real players. You look at KCP as a very diverse player. He keeps working at his game and you look at his improvement and just like anybody else, he will improve in other areas. Part of Stan’s coaching philosophy obviously is defense. So you say go into the luxury tax for nothing, then that would be silly because then we’re putting the franchise behind. But given that we have such a good core, if that’s what it took, and we feel we’ve made such progress this year, I wouldn’t hesitate to do it because we want to keep getting better.”

"We obviously were nervous and I'm still not a fan of NBA players in the Olympics, but Andrew was going to have to go through a process to get back on the court anyway," Cuban wrote in an email. "Our staff has communicated with him and we knew he would be cautious in his approach to returning."

Bogut, who Dallas acquired in a trade with the Warriors this offseason, is recovering from bone bruises suffered in the NBA Finals. He scored 18 points to lead Australia to a 87-66 victory over France on Sunday.