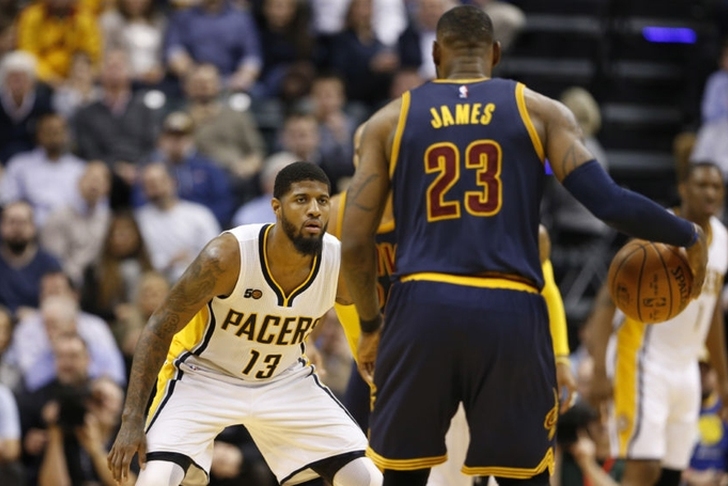 The entire NBA has turned their attention to the upcoming free agency period, which starts on Saturday. Several big names figure to be available, including Gordon Hayward, Chris Paul and Blake Griffin, which will lead to another summer of intrigue. There's also the steady rumors around Paul George, who could be traded by the Pacers. Here are all the latest NBA rumors you need to know:

Paul George could sign long-term with Cavs
George has said that he only plans to sign with the Los Angeles Lakers as a free agent next offseason, yet the Cleveland Cavaliers have been trying to acquire him to be a "one-year rental" as they try to compete for a championship next year.

However, if they can get a deal done, it appears they could be in for more than a one-year run with him. According to ESPN's Stephen A. Smith, George would stay with the Cavs as long as LeBron James was there.

“He’s obviously indicated he doesn’t want to stay with the Pacers, which has put them in a bind,” Smith said on SportsCenter. “He can’t stay there; they’ve got to make a move this summer because they can’t open the season with him. So they’re looking to move him. According to numerous reports, he’s told the Los Angeles Lakers that he wants to be there. He intends and practically guaranteed them that he’s coming by summer 2018. But from what I heard as recently as a couple of days ago, is that he’s letting word leak to the Cleveland Cavaliers that if LeBron indeed elects to stay in Cleveland, then Paul George won’t depart Cleveland as long as LeBron is still there if they pull off a trade to acquire him.”

“Now it appears to be the Cavaliers or the Los Angeles Clippers. You hear stuff about the San Antonio Spurs and things of that nature, which he wouldn’t mind, but that would be a one-year rental. Whereas with the Cleveland Cavaliers it appears it would be more than that if LeBron James stayed. But his ideal landing spot would be the Los Angeles Lakers, despite the fact that they’re not contenders right now.”

LeBron can also be a free agent next offseason and is expected to test the open market.

The Cavs, who are already well into the luxury tax threshold, are trying to engineer a three-team trade to acquire George. Any deal would likely involve Cleveland getting rid of Kevin Love for contract purposes.

"I am talking to some guys -- Paul. I know his ultimate goal of where he wants to be. I'm trying to see if we can make something happen," Wall said.  "Look at our team. We are one piece away. We have the point guard, we have the shooting guard, we have the center, we have the power forward. Our 3-man [Otto Porter Jr.] did great for us. You can't take nothing away from what he did. But [George] is a guy that can guard LeBron and go back at LeBron. It's a piece that you're going to need to win. If you don't have a guy who can do that, you don't have a chance."

Carmelo Anthony "reluctant" to leave Knicks
Despite New York Knicks president Phil Jackson's desire to trade Carmelo Anthony, he does not plan to waive his no-trade clause because he wants to stay in New York, according to Frank Isola of the New York Daily News.

But things are complicated. Carmelo and his actress wife, La La, are estranged, and with Anthony having a close relationship with his only son, he is reluctant to move out of New York. According to a person familiar with Anthony's thinking, Carmelo is no longer enamored with playing in Los Angeles if it means having to be away from his son for an extended period of time.

Anthony, according to the same source, was toying with the idea of orchestrating a move to either Philadelphia or Washington, which would keep him close to New York. However, Anthony's mindset now is to stay in New York and play for the Knicks... even though Jackson doesn't want him.