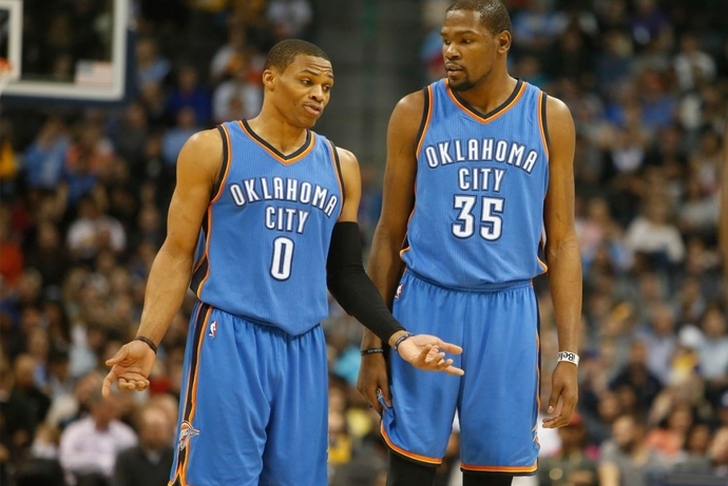 The NBA free agency frenzy has died down, although there are still a couple of quality players available on the open market. There are a few trade rumblings as well, although the biggest story focuses on Kevin Durant and Russell Westbrook. Here are the latest NBA rumors and news you need to know.

Westbrook Angry At Durant
Russell Westbrook thought Kevin Durant was coming back to the Oklahoma City Thunder, ESPN's Royce Young reports. Because of Durant's decision, and failure to let his teammate know, the two haven't spoken.

The two have not spoken since Durant's decision. Those close to Westbrook say he's both angry and hurt not only by Durant's decision to leave but also because Durant didn't even call to tell him personally. Westbrook wasn't prepared to be in this position -- three weeks ago, like everyone else, he thought Durant was coming back. And he had to learn the hard way he wasn't.

What's more Young said on an ESPN podcast that Durant told Westbrook he'd be coming back (there's a catch with this that we'll get to).

"Three weeks ago, Kevin Durant’s sitting there at dinner, telling him 'Hey, I’m coming back, man. Don’t worry about it,'" Young said. "And now, Russell Westbrook has been kind of thrown into this in having to decide his future a summer earlier than expected ... Kevin Durant, more so than even that, was telling people, 'Hey, yeah, I mean I’m coming back.'

Like I said in there, a week before Kevin Durant sat down in the Hamptons, he was in Oklahoma City ready to make an offer on a multi-million-dollar house. So, the guy was pretty serious about coming back, and then things turned rather quickly for him to leave. And there’s no doubt that the organization felt a little bit burned by this."

The catch is that Young might have not meant what he said.

@Jet_Black @TrueHoopTV I'm not sure what I said. What I meant is Westbrook believed Durant would come back after their meeting.

No matter what actually happened, it's clear Westbrook is not happy with Durant right now.

Larry Sanders Coming Back?
The former Milwaukee Bucks big hasn't played in the NBA since he stepped away in early 2015. He said he was battling depression and anxiety, and the gifted big man might be ready to make a return. He's been tweeting about returning to the NBA and it might be serious.

Larry is not looking for crazy money, in fact I think he'd play for the minimum, so everyone is possible. https://t.co/iSjt7sRAYA

There's some risk with Sanders, but there was a reason he was once given a four-year, $44 million extension a few years ago.

Clippers Looking For New Arena?
The Clippers have played in Staples Center since the 1999 NBA season, sharing it with the Lakers and Kings. But they might not be there for long. ESPN reports owner Steve Balmer is looking into a new arena, with six locations identified, all of which are in Southern California.

There are several reasons for leaving Staples Center. For starters, the Clippers play third fiddle to the Kings and Lakers at the arena. The Clippers also don't own the arena, which limits their revenue options in terms of sponsorships and the like. Plus, it would allow them to build their own training facility. The Clippers' lease with Staples Center expires in 2024. ESPN reports any move would come after that.

Paul Pierce is planning on returning to the Clippers for the 2016-17 season, his 19th in the NBA, per source.

Seems pretty cut and dry right? Not so fast.

However, another source said Paul Pierce is still weighing everything and will make a final decision in a few weeks.

So maybe Pierce will return and maybe he won't. The betting money is still on him coming back for at least one more season. He has two years left on his deal.