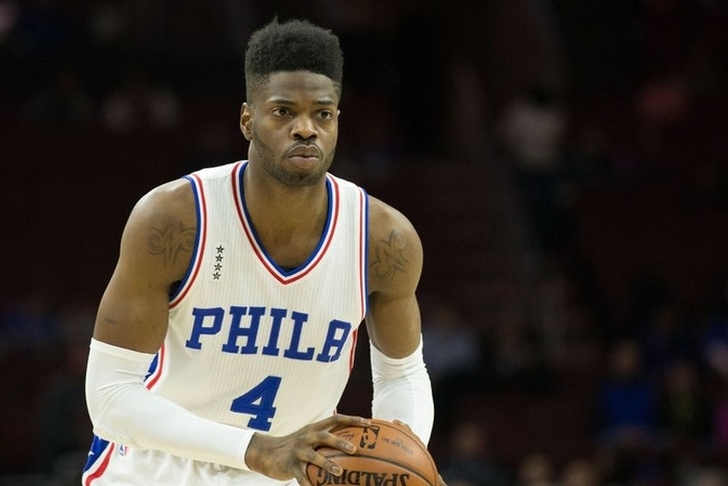 Celtics interested in Noel
The Philadelphia 76ers were shopping both Nerlens Noel and Jahlil Okafor earlier this offseason, and they may have a taker for one of those players. According to A. Sherrod Blakely of CSNNE.com, the Celtics are very interested in acquiring Noel, who is "very open" to a trade:

Noel has not asked for a trade, but multiple league sources told CSNNE.com that he is “very open” to being traded if the Sixers decide to make that decision.

Another league source contacted by CSNNE.com on Thursday morning indicated that the Celtics still have a high level of interest in Noel but no deal is imminent.

When the Sixers drafted Ben Simmons with the No. 1 overall pick in June, that created a major logjam for Philadelphia’s frontcourt. Simmons joins a group that includes Noel, Jahlil Okafor, Dario Saric and Joel Embiid.

Every NBA team knows that Philly has to deal at least one of their big men, which is why the Sixers’ discussions by and large have not been fruitful.

When asked by Sirius Radio as to whether he was comfortable going into the season with three centers (Noel, Jahlil Okafor and Joel Embiid), Colangelo replied, “Absolutely not.”

Heat hint at Bosh's return
Miami Heat forward Chris Bosh's NBA future has been in doubt due to blood clots that have cut each of his last two seasons short, but he may be returning to the court for the start of the 2016-17 season. Ira Winderman of the South Florida Sun-Sentinel reports that the Heat have hinted at Bosh being back on the court this year:

In a letter emailed Thursday night to Miami Heat season-ticket holders to coincide with the release of the team's 2016-17 schedule and also posted on the team's website, Heat owner Micky Arison hinted at a return by All-Star forward Chris Bosh while focusing on where the franchise stands.

Toward the close of the email, Arison wrote:

"What won't change is the culture of this organization. The Miami HEAT is a Championship organization. I fully expect this team, from Pat Riley to Head Coach Erik Spoelstra, to our veterans Chris Bosh, Udonis Haslem, Goran Dragic and Josh McRoberts, to our returning young core of Hassan Whiteside, Justise Winslow, Josh Richardson and Tyler Johnson, to the fresh faces joining the HEAT Family to continue our mantra of being the 'hardest working, best conditioned, most professional, unselfish, toughest, meanest, nastiest team in the NBA.' "

Heat president Pat Riley has said the team will address Bosh's future this month or next. Bosh averaged 19.1 points and 7.4 rebounds in 53 games last season.

LeBron James will re-sign with the Cleveland Cavaliers on a three-year, $100 million maximum contract, league sources told The Vertical, and the three-time NBA champion also pressured the Cavs to finalize a deal to keep free agent J.R. Smith.

James announced the contract on a video posted on social media and added near the end of the video: “Let’s get J.R. done. It’s that time.” Smith and the Cavaliers have remained in discussions on a multi-year agreement, sources said.