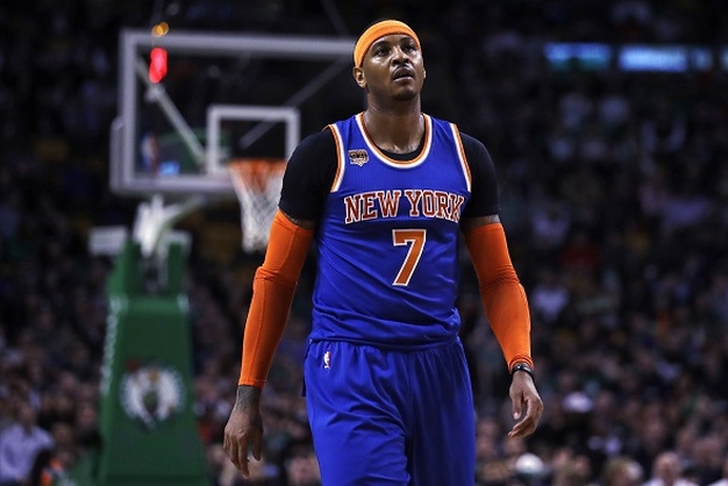 The NBA Playoffs are now in full swing as we are in the middle of the first round, but the Chicago Bulls chances at upsetting the Boston Celtics have taken a major blow as point guard Rajon Rondo was diagnosed with a broken thumb. For the many teams that are not in the playoffs, they have already shifted their focus towards the offseason. Here's all the latest news and rumors from around the league:

Rondo to miss rest of series
Chicago announced that Rondo will out indefinitely and will be re-evaluated in 7-10 days, but he is largely expected to miss the rest of their series against the Celtics, according to Chuck Garfien of CSN Chicago.

Fred Hoiberg said Rondo is most likely out for the rest of the series.

Celtics coaching staff wants to trade for Carmelo
Off the court, Boston's front office is still looking to acquire another star player this offseason, and if the coaching staff has their way, that player will be Carmelo Anthony. According to Marc Berman of the New York Post, the Celtics coaches wanted to trade for Anthony during the season before general manager Danny Ainge decided not to pursue the deal.

Now, with Anthony firmly on the trade market this offseason, they plan to re-engage in trade talks with the New York Knicks.

With the Celtics fading in the first round, the chances of Carmelo Anthony wearing green are increasing.

According to an NBA source, the Celtics coaching staff was in favor of trading for Anthony at the trade deadline, but general manager Danny Ainge had too many reservations. One of Ainge’s concerns, according to a source, was an Anthony trade would have given Boston no real cap space to work with for the 2017 free-agent class.

With the top-seeded Celtics possibly on their way to getting swept by the eighth-seeded Bulls, Ainge’s thoughts on adding Anthony could change this July.

New York wants Jae Crowder included in the deal and some draft picks, likely including Boston's rights to the Brooklyn Nets' first round pick (currently projected to be No. 1 overall). Other players may be included for salary cap purposes, but the Celtics could have between $25 million and $30 million of cap space to take on Anthony's contract.

Anthony has a no-trade clause, but has expressed interest in waiving it if he was traded to a contender. He averaged 22.4 points and 5.9 rebounds per game this past season.

Magic interested in Cavs GM David Griffin
The Orlando Magic are looking for a new general manager after firing Rob Hennigan, and they are targeting Cleveland Cavaliers GM David Griffin to be his replacement, according to Adrian Wojnarowski of The Vertical.

The Orlando Magic's search process for a new top basketball executive could extend until the end of the Cleveland Cavaliers' playoff run, which would allow Orlando to gauge the interest of general manager David Griffin, league sources told The Vertical.

Griffin has served as GM of the Cavs since the start of the 2014-15 season.

Timberwolves to make contract decision on LaVine, Wiggins
Andrew Wiggins and Zach LaVine are both entering the final year of the rookie contracts, and while both might be candidates for the rookie designated extension, the Minnesota Timberwolves can only give that to one of them, according to Bobby Marks of The Vertical.

The good news is that the Timberwolves will need to make only one phone call for extension dialogue with Wiggins and LaVine because they have the same representative in agent Bill Duffy. But the players have different circumstances. LaVine is recovering from right ACL surgery in mid-February, and the Timberwolves need to measure their comfort level in giving Wiggins a max-level contract. Minnesota is also eligible to have only two players under the rookie designated extension. The rule allows a team to give a five-year max extension (not including the last season of the current deal) to two players during the length of the CBA. The Timberwolves will likely have only one slot available with Karl-Anthony Towns designated for the summer of 2018.

Wiggins averaged 23.6 points and 4.0 rebounds per game this past season, while LaVine averaged 18.4 points, 3.0 assists and 3.4 rebounds in 47 games before tearing his ACL.

Follow our NBA news page for all the latest NBA rumors!