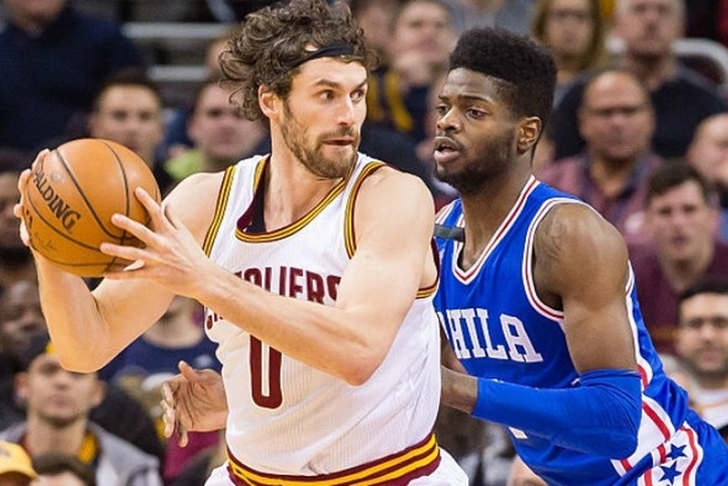 Love to 76ers for Noel?
The Philadelphia 76ers have had Nerlens Noel on the trade block all offseason, and he may be close to joining the defending NBA champs. According to Fansided's Bret Stuter, the Cleveland Cavaliers are interested in trading for Noel, and may be willing to part ways with Kevin Love to acquire him:

Rumors surrounding the Philadelphia 76ers centers are nothing new.  They have come non-stop since the arrival of team president Bryan Colangelo.  Almost instantly, Colangelo has pitched the message of the Philadelphia 76ers needed to address three talented centers.  Colangelo is persistant that he is looking to trade one of their centers before the start of the 2016-2017 season.

So far,  trade rumors abound but no offers amount to more than a bag of pretzels and a six-pack.   Perhaps the offers are improving.

In two stories, the current rumors are linking the Cleveland Cavaliers as a team in hot pursuit of a rim protecting center, a speciality of the Philadelphia 76ers. The offer? Kevin Love.

We know that Nerlens Noel is aware of trade rumors.  He’s modified his twitter account to cite the Philadelphia 76ers as his current team.  That change that has prompted many to believe he is welcome to a change.  In fact, the recent message of his loving Boston was interpreted as a signal to the Celtics to up their offer and trade for him.  He may have gotten the message out, but to a different team.

The Cavaliers need Noel if they intend on repeating as NBA champions.  To get him, the team could offer a package of Love and a second player like Iman Shumpert for Noel and Carl Landry. Both teams would enjoy improving their salary cap.  Cleveland would benefit from the huge boost to defending the paint.  Meanwhile the 76ers would benefit from a young wing defender to work with.  The biggest piece is how would the Philadelphia 76ers work without Noel.

Cleveland has also been linked to Kings center DeMarcus Cousins, so it's clear they are at least looking into ways to upgrade their roster to keep pace with the Warriors.

Embiid set to return in preseason
Joel Embiid has not played a single game in each of his first two seasons with the Sixers, but he is set to make his debut soon. Head coach Brett Brown told ESPN's Zach Lowe that Embiid will be available to play in the preseason, via Philadelphia Magazine:

Lowe then specifically asked whether he was on track to play in the preseason. “Yes he is,” Brown said without hesitation.

The Sixers will begin preseason play October 4th, when they take on the Boston Celtics at the Mullins Center.

“There’s a real feel good mentality right now in our city. I think everybody’s starting to get excited,” Brown continued. “Obviously, this is just one more phase, one more wave on how we build our program. But we have such fantastic young, talented pieces to try to put that puzzle together. Everybody’s excited here in Philadelphia.”

Philadelphia drafted Embiid with the No. 3 overall pick in the 2014 draft, but several surgeries to repair a fracture in the navicular bone in his right foot have kept him out.

Melo playing in last Olympics?
New York Knicks forward Carmelo Anthony can become the first men's basketball player to win three gold medals if the U.S. beats Serbia today, but according to The Vertical's Michael Lee, it may be his last shot at a gold medal:

Wade didn’t join Anthony, James and Paul four years ago in London. Paul and James didn’t join Anthony this time around in Rio. But James, who used this summer to rest after delivering Cleveland its first NBA title, has stated recently that he hasn’t necessarily retired from USA Basketball, leaving open the door for Tokyo in 2020. Anthony could only chuckle when asked about James’ plans.

“He can have it. He got it,” Anthony told the Vertical, without completely ruling out a return. “I don’t know. That’s too far ahead for me be thinking. That’s too far ahead. This decision was hard to come back this year. I think it was just the timing of what was going on in the world, what was happening here [in Brazil], what was happening in our country. Also taking into consideration family, or being healthy.”

Anthony will be 36 years old when the 2020 Olympics start.