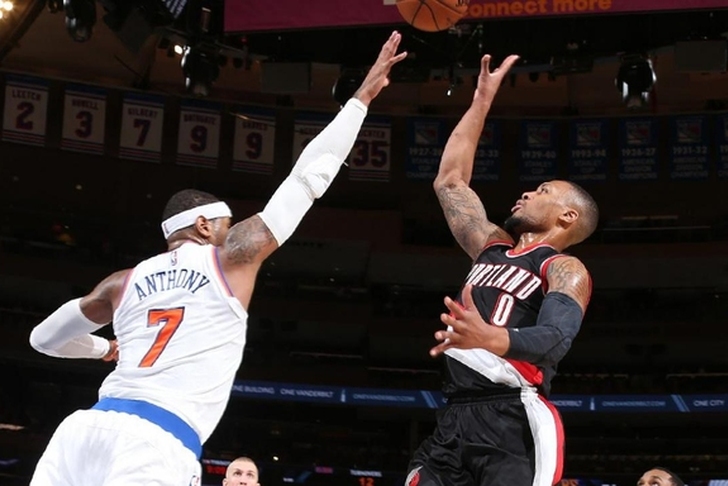 The new NBA season is fast approaching with training camps opening in just a couple of weeks, and teams are working to finalize their rosters and sure up any uncertainty surrounding their franchise. Carmelo Anthony's future with the New York Knicks continues to dominate headlines across the league, and he may be expanding the list of teams that he is willing to waive his no-trade clause for. Here's the latest on that and everything else you need to know in today's NBA Rumors Roundup:

Carmelo doesn't "seem opposed" to being traded to Trail Blazers
Anthony is trying to force the Knicks to trade him to the Houston Rockets, yet the two sides remain far apart on a possible deal due to New York's unwillingness to take on the three years and $60 million remaining on Ryan Anderson's contract. The Knicks told Anthony they are "unwilling to make a bad trade" involving him and want him to consider waiving his no-trade clause for other teams.

Carmelo has refused to do so to this point but the Portland Trail Blazers are still trying to get him to change his mind. Portland has been pursuing Anthony the hardest this offseason with star guards Damian Lillard and C.J. McCollum serving as primary recruiters, and Lillard told The Undefeated that Anthony doesn't "seem opposed" to being dealt to Portland in conversations the two have had.

"I didn’t want to press (Anthony)," Lillard said. "I ain’t a big fan of doing all the extra recruiting and all that stuff. And I guess they call it tampering or whatever. It’s not against the rules for us to interact with each other. We all peers, we all play in the same league and everybody hints at playing with each other. ‘What you think about this?’ ‘What do you think about that?’ All that matters is whether it got done or did not get done. Or hasn’t got done, and it hasn’t got done. So, it is what it is."

Anthony has two years and $54 million remaining on his deal, though he can opt out after the upcoming season. He averaged 22.4 points and 5.9 rebounds per game this past season.

Los Angeles hasn't confirmed the report but the franchise has sent a letter to season ticket holders recommending that they "hold on to" their tickets for the game on Dec. 18 "for a "special event."

That game will be LA's second of the season against the Warriors with tip-off currently set for 10:30 pm ET on NBATV.

This is the first year in which the NBA is selling jersey advertisements and roughly half the league has already agreed to sponsorship deals.

Most are in the range of $5-$7 million per season with the Cleveland Cavaliers sporting the second-highest deal at $10 million per year. Golden State's deal doubles that.