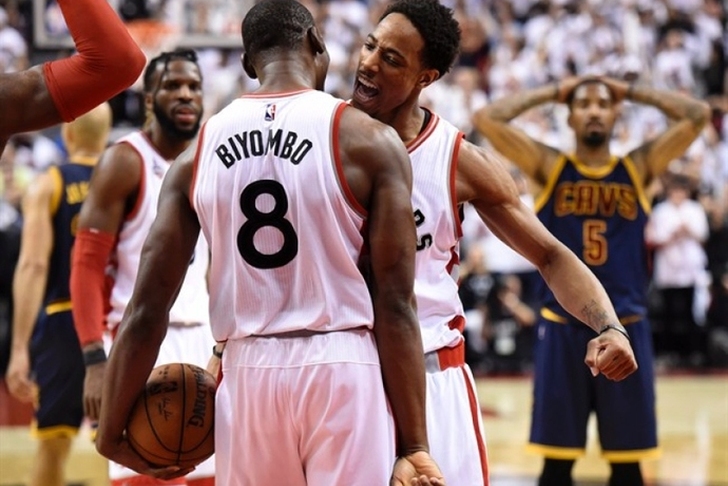 Raptors to re-sign both DeRozan and Biyombo?
DeMar DeRozan and Bismack Biyombo are both expected to receive max offers in free agency from other teams this offseason, and because of that, the Raptors are expected to only bring one of them back. However, Sam Amick of USA Today reports that there's a very real possibility that Toronto can re-sign both players.

The good news, for DeRozan and the Raptors, is that Biyombo wants to come back. According to a person with knowledge of his situation, he will be patient as Toronto works things out with DeRozan as its top priority. Biyombo will have no shortage of suitors should the Raptors blink long enough to lose DeRozan, but there will be no immediate rush to seize the speediest deal.

Should DeRozan be willing to shave some off the top of his salary as a way to help Biyombo stay on board, as it seems he possibly will, then there is a very real interest on Biyombo’s part of making it all work. The person spoke to USA TODAY Sports on the condition of anonymity because of the private nature of the situation.

The Lakers, Clippers, Knicks, Warriors, Heat & Magic are all expected to try and sign DeRozan away from the Raptors, while the Mavs, Lakers and Celtics are expected to pursue Biyombo.

Noah won't re-sign with Bulls
The Chicago Bulls have expressed optimism that they can re-sign big man Joakim Noah this offseason, but Joe Cowley of the Chicago Sun-Times reports that Noah has no desire to return to the team.

A source close to the situation not only shot down a report last month that the Bulls and Noah were having early “positive dialogue’’ on coming back together, but reiterated a Sun-Times story from late May in which Noah was telling teammates that he had no trust in the direction the front office was taking the team.

According to the source, Noah and his agent, Bill Duffy, have already been gathering information on possible destinations, with a specific priority list in mind. First and foremost, Noah wants a chance to win. Followed closely by a chance to start, as well as finish games, and also a team that will continue to get behind his Noah’s Arc Foundation.

The Knicks are the favorite to sign Noah after trading for Derrick Rose, but the Wizards and Timberwolves are also in the mix. He averaged 4.3 points and 8.8 rebounds per game last season.

Bulls shopping Taj Gibson
Chicago is expected to lose both Noah and Pau Gasol in free agency this offseason, yet there's another big man they're trying to get rid of. According to Cowley, the Bulls are shopping forward Taj Gibson.

If they can get rid of Gibson, Chicago's frontcourt next season would consist of Nikola Mirotic, Bobby Portis, Robin Lopez and Cristiano Felicio.