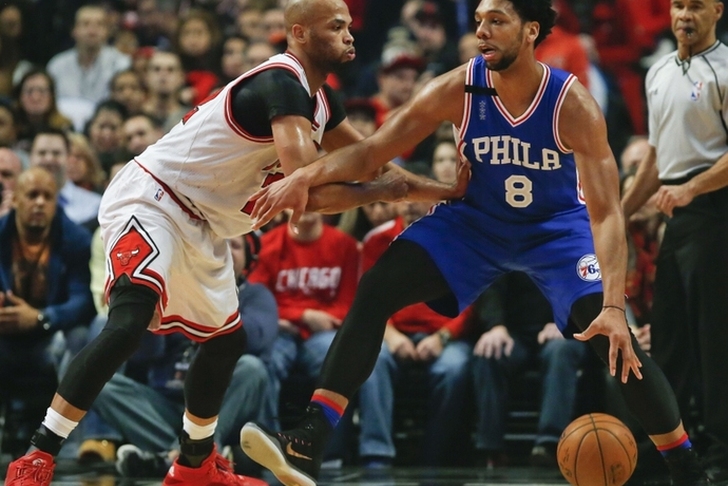 The NBA Trade Deadline is less than three weeks away, and as the All-Star break approaches, rumors are flying about which players may be moved as teams try to improve their rosters or flip veterans for future assets. Check out the latest NBA trade news & rumors below.

Bulls want to acquire Okafor
The Chicago Bulls are interested in acquiring Philadelphia 76ers center Jahlil Okafor, who the Sixers are open to trading, according to Vincent Goodwill of CSN Chicago.

So far, there's more interest on the Bulls' side than the 76ers' side, according to sources, but the Bulls are interested in Okafor's services. Because salaries have to match and Okafor is on a rookie-scale deal, one wonders how it can work if the 76ers aren't enamored with some of the Bulls' young players who've yet to fully blossom. The Bulls could conceivably open up talks to a third team if need be, considering it isn't likely they'd want to part with any future first-round picks as they're still deciding how they are to proceed with franchise direction in the next couple seasons.

Talks aren't necessarily heating up, but they aren't dead. It's interesting how they could see using Okafor as a low-post scorer while currently having Cristiano Felicio and Robin Lopez at center.

Chandler demands trade from Nuggets
Another player that is expected to be traded this offseason is forward Wilson Chandler, who has demanded a trade from the Denver Nuggets, according to Sam Amick of USA Today:

As the NBA’s Feb. 23 trade deadline approaches, the Denver Nuggets arre widely seen as a team that will likely be active. And if 29-year-old forward Wilson Chandler has his way, all that trade chatter will lead to him changing jerseys sometime soon.

According to two people with knowledge of Chandler’s situation, the player who came to Denver as part of the Carmelo Anthony deal six years ago wants to be traded. The people spoke to USA TODAY Sports on the condition of anonymity because of the sensitive nature of the situation.

Chandler’s frustration, according to the people, is born out of the inconsistency with his role. While he’s having a career year, averaging 15.4 points, 6.7 rebounds, two assists and 30.2 minutes per game for a 21-27 Nuggets team that is currently ninth in the Western Conference, he hasn’t started since Jan. 12 – a win over Indiana in which he had 22 points, eight rebounds, four assists, two steals and had a plus-22 rating.

Denver is also gauging the market value of point guard Emmanuel Mudiay, and may put both together in the same deal to try and land a veteran All-Star player.

Knicks don't want Crawford
As the New York Knicks continue to try and trade Carmelo Anthony before the deadline, the Los Angeles Clippers have emerged as the most likely destination for him. The Clippers don't want to give up any of their Big 3, so they have made several quality role players available, including Jamal Crawford. However, New York isn't interested in him, according to Mitch Lawrence of Forbes.

According to industry sources, the Knicks don't want to bring back Jamal Crawford, a player the Clips have offered. The ex-Knick still has three seasons at $45 million on his deal, and Jackson wants to avoid any lengthy deals. So the Clips and Knicks will need to find a third team to make the deal work, but it's all elementary, anyway. Anthony can use his no-trade clause to veto any deal.