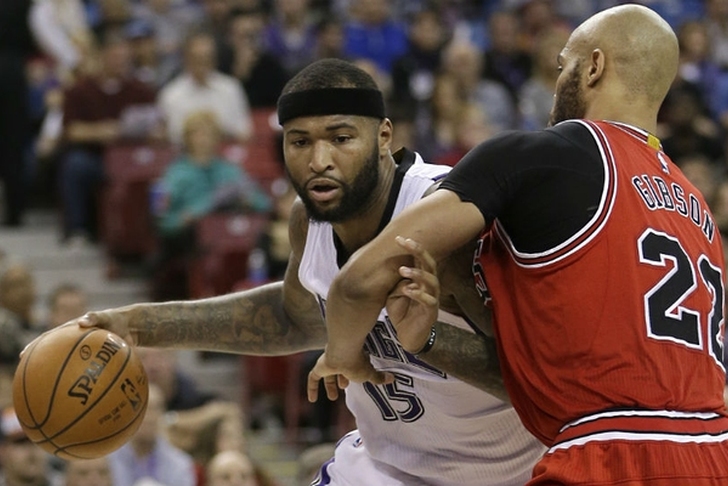 Bulls to trade for Cousins?
The Sacramento Kings' renewed interest in listening to trade offers for DeMarcus Cousins has raised the feeling that the All-Star big man may be traded sooner rather than later. According to Hoops Habit's Allana Tachauer, the Bulls are interested in acquiring Cousins:

Lately, the rumor mill has been swirling with the idea of Cousins joining former teammate and best friend Rondo, on the Bulls.

Is it a stretch? Probably. But it is not impossible.

Plus, it has already been proven that he works well alongside Rondo. And currently, the big man is a part of Team USA with Butler. Additionally, there should be no reason why he and Wade would not be a good fit either.

So how could the Bulls make this dream a reality?

Well, the Kings are constantly looking for young talent to develop. And between guys like Bobby Portis, Doug McDermott, Nikola Mirotic and even rookie Denzel Valentine… the front office should have more than enough options to entice Sacramento with.

Chicago is obviously looking to make a splash in the Eastern Conference this upcoming year, and so far, they have done a good job of putting themselves in a position to do so.

Cousins has also expressed his own interest in joining the Bulls, as shown in this tweet from the Chicago Chronicle's Carlos Douglas:

Demarcus Cousins: "I love @RajonRondo & @JimmyButler is my BOY & they got @DwyaneWade. Chicago is a great city & they got a squad." #Bulls

It was a recent afternoon at the Drew League in South Central Los Angeles, where Davis has spent hundreds of summer days just like this one. On this day he coached his team, BB4L, to a lopsided win. He then relaxed under a beating sun and an older man asked whether Davis is gunning for one more season in the NBA Developmental League. “Nah, I’m trying to get back to the NBA,” Davis, 37, said. “The real thing.” “You’re an inspiration, Baron,” the man answered. “If you can do it, I’m starting to think I can do whatever.”

Splitter to be ready for camp
Atlanta Hawks big man Tiago Splitter underwent season-ending hip surgery in February, and though he is still recovering, he will be ready for the start of training camp, according to Chris Vivlamore of the Atlanta Journal-Constitution:

Spoke to Tiago Splitter from Rio. He still plans to be ready for start of training camp after hip surgery. Will post story tomorrow.

Splitter averaged 5.6 points and 3.3 rebounds per game in his first season with the Hawks last year.