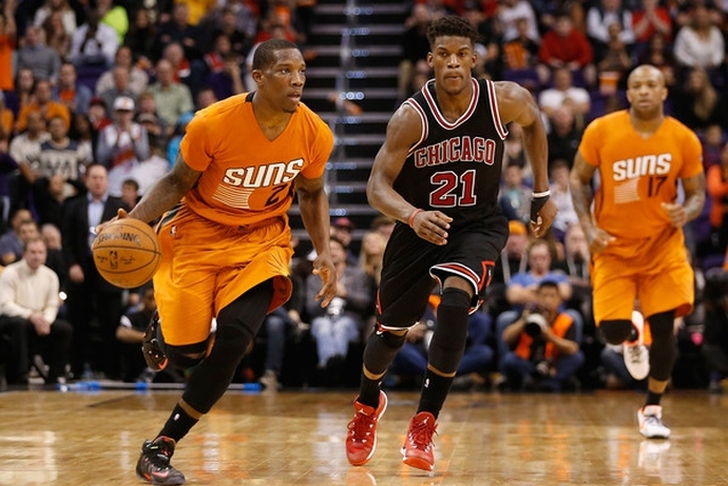 The NBA Trade Deadline is exactly three weeks away, and as the All-Star break approaches, rumors are flying about which players may be moved as teams try to improve their rosters or flip veterans for future assets. Check out the latest NBA trade news & rumors below.

Bulls front office spying on locker room
The distrust between Chicago Bulls star Jimmy Butler and the front office was detailed in a report from ESPN's Ryen Russillo in which the front office threatened to bench Butler in order to depress his market value if he didn't sign an extension with the team. Now, Butler is apparently telling new plays on the team to be careful of what they say in the locker room because assistant coaches will tell the front office everything they hear, according to Joe Cowley of the Chicago Sun-Times.

Butler, as well as several other Bulls players, have also had issues with the "spying'' that goes on in the locker room, with Butler warning new players that if they didn't want Forman to hear criticism, don't talk in front of certain assistant coaches like Randy Brown.

The belief is that the Bulls love to gather as much ammunition as they can on players, so they can win the press conference when the break-up comes, whether it's a trade or free agency.

The Bulls are currently 25-25 on the season and are in seventh place in the Eastern Conference.

Suns will not trade Bledsoe
Rumors have started surfacing about the Phoenix Suns potentially trading point guard Eric Bledsoe for young players and/or future draft picks, but ESPN's Zach Lowe reports the team has no plans to trade him.

Bledsoe's ascension raises an obvious question: Should Phoenix, sporting a bundle of 20-and-under prospects, sell high on Bledsoe, now 27 -- and select his successor near the top of a draft loaded with point guards? Remember: Bledsoe has three knee surgeries in the rearview. His value is cresting, and the Suns could flip him for future assets that match the timelines of Booker, Marquese Chriss, Dragan Bender, and whomever they pick in June.

The Suns are resisting after watching Bledsoe's growth over the last six weeks. "This is the best I've ever seen him play," said Ryan McDonough, the team's GM. "The learning curve for point guards is steep. We think Eric will play better in his late 20s and early 30s, right as Devin is entering his prime."

Watson is more blunt: "I can almost guarantee Devin and Eric will be on the same team next year," he said.

Bledsoe is averaging 21.6 points, 6.2 assists and 5.0 rebounds per game this season.

Knicks still trying to trade Carmelo to Cavs
The biggest name who is available on the trade market is Carmelo Anthony, who the New York Knicks are openly trying to deal. While they were originally rebuffed in trade talks with the Cleveland Cavaliers, they are attempting to restart those talks, according to ESPN's Ramona Shelburne and Marc Stein.

The New York Knicks continue to pursue Kevin Love in advance of the Feb. 23 trade deadline despite the Cleveland Cavaliers' unwillingness to part with the All-Star forward in a deal for Carmelo Anthony, according to league sources.

Sources said the Cavaliers, meanwhile, do maintain an interest in Anthony -- which would pair him with Cleveland star and close friend LeBron James -- but only if a deal can be struck without the league's reigning champions surrendering Love.

The Knicks, sources say, have continued to engage the Cavaliers, LA Clippers and Boston Celtics in trade talks, believing those are all the teams that Anthony would find appealing enough to surrender his trade-blocking ability if a deal could be struck.

New York is trying to orchestrate a three- or four-team trade to make it easier to trade Anthony's massive contract, which has $54.2 million left over two seasons. He is averaging 23.0 points and 6.9 rebounds per game this season.