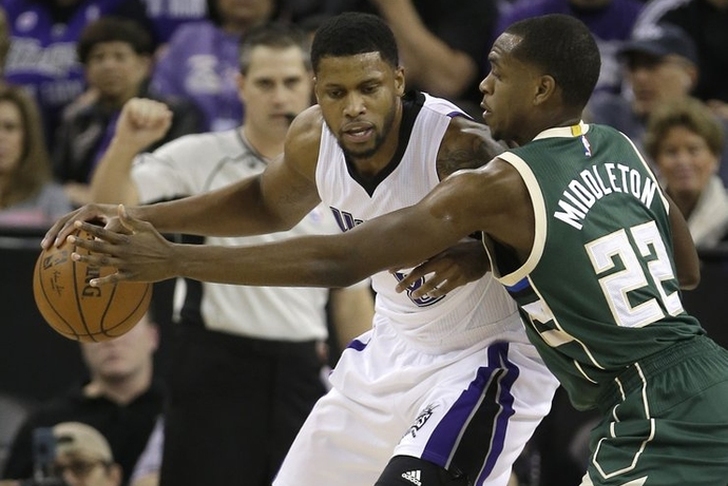 The NBA offseason is coming to a close with training camps starting on Saturday for teams participating in preseason NBA Global Games. However, there are a few notable trade rumors floating around as well as questions surrounding the health of a few stars. Here are the latest NBA rumors you need to know:

Bucks looking to trade
The Milwaukee Bucks were dealt a big blow yesterday when they announced that sharpshooter Khris Middleton will be out for six months with a torn hamstring, and the team is looking to address that for the upcoming season by making a trade for wing help, according to Adrian Wojnarowski of The Vertical:

It remains to be seen if the Bucks are targeting a starting-caliber player or not. Second-year man Rashad Vaughn is the backup shooting guard who would be in line to become the starter, but Milwaukee has several options. The addition of Matthew Dellavedova means they could slide 6'6" point guard Michael Carter-Williams to the position, or play small forward Giannis Antetokounmpo at the position, who they were planning on using as a point guard some this year.

Sacramento's Rudy Gay is the best wing player that is known to be readily available on the trade market. Milwaukee has also been trying to get rid of center Greg Monroe, and will likely try to use him to get that wing help.

Middleton was entering the second season of a five-year, $70 million contract he signed with the Bucks last offseason. He averaged 18.2 points, 4.2 assists and 3.8 rebounds per game last season.

Timberwolves to buy out Garnett's contract?
Kevin Garnett has still not told the Minnesota Timberwolves whether he plans to return for another season or will retire, but the two sides are thinking about reaching a buyout agreement, reports Kent Youngblood of the Minneapolis Star Tribune:

Timberwolves camp is looming — the first practice is Tuesday — and Wolves owner Glen Taylor still is waiting to hear if Kevin Garnett wants to play another season.

Wednesday night ESPN reporter Marc Stein tweeted that the Wolves and Garnett were in “advanced discussions’’ on a buyout that would end Garnett’s second stay with the team.

Taylor said the report was an overreach, though it is possible that a buyout could be agreed to should Garnett decide he no longer wants to play. Garnett is under contract for $8 million this season.

But no agreement can be negotiated until Taylor — who has been handling contact with Garnett — is informed of Garnett’s intent. And Taylor said he hasn’t talked with Garnett for weeks.

If Garnett plays this season, he will be the first player in NBA history to play 22 seasons in the league. He averaged 3.2 points and 3.5 rebounds in 38 games last season.

Before Scott Brooks opens his first training camp as the Washington Wizards' head coach, he’s still unsure of the status of his all-star point guard.

During a lunch with Washington Post editors and reporters on Wednesday, Brooks addressed a wide range of topics including John Wall’s health. When asked if Wall would be available for the Wizards’ first training camp practice, Tuesday on the campus of Virginia Commonwealth University in Richmond, Brooks expressed uncertainty, though he didn’t appear too concerned at this point.

“Don’t know that but he’s doing some one-on-one, he’s doing some three-on-three. Not really worried about that,” Brooks said. “Like all of our athletes, I want them to be ready but he’s definitely moving towards that direction.”

In spite of the improvement, Brooks hesitated to provide a date when Wall will be cleared for five-on-five contact.

“I don’t like to put a timetable [on it] because if he doesn’t meet it [then] we’re saying, ‘Oh, he’s still hurt,’ ” Brooks said. “He’s improving. His body looks great [but] his conditioning is going to be behind.

“Once you step into an NBA practice, the level goes way up,” Brooks continued. “Especially in a training camp situation where you have guys trying to make it, guys trying to fight for minutes, trying to fight for starting jobs, but we have to make sure [about Wall] because that’s when things can go sideways. I saw him this morning for an hour, he looked great, but I don’t know -– we’ll find out soon.”