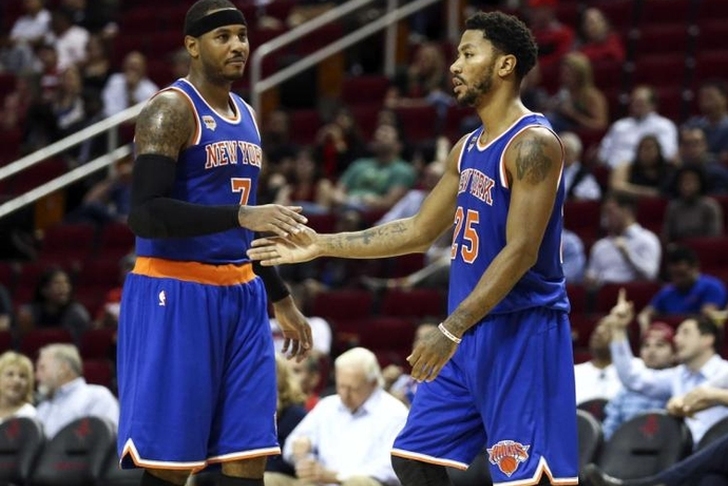 NBA Free Agency has officially been underway for over two weeks, yet it feels like it's already over. Nearly all of the big names have already signed new deals, and as such, many teams are exploring trade possibilities for players that are on the block. Here are all the latest NBA rumors you need to know:

Portland Wants Melo
While Carmelo Anthony still expects a trade to the Houston Rockets, another team is trying to get in on the trade talks: the Portland Trail Blazers.

"One team that New York and Houston had hoped would facilitate a multi-team trade for Anthony, the Portland Trail Blazers, plans to participate in a deal for Anthony only if he decides to expand his no-trade clause to include them, league sources told ESPN," Adrian Wojnarowski reports. "Portland believes the addition of a player such as Anthony would furnish it with talent and depth comparable to those of the top Western Conference contenders, except for the Golden State Warriors, league sources said. Because of that, the Blazers have little, if any, inclination to facilitate an Anthony deal that would land him with a Western Conference rival such as Houston, league sources said."

While a trio of Damian Lillard, C.J. McCollum and Melo is a fascinating one, it doesn't appear that Anthony has any interest. He wants to play for the Rockets, but completing a trade with the salaries involved remains difficult.

Bucks & Derrick Rose
The top point guard still on the market is still Derrick Rose. The Bucks have interest, but it doesn't appear a deal is all that close.

While there's mutual interest between the Bucks and Derrick Rose, no meeting is scheduled for now, I'm told.

The Bucks don't have a ton of money to offer, but they do need point guard. It was a bad year to be a free agent point guard, with more supply than demand. Rose has been one of the victims this year of the market. The 28-year-old averaged 18 points and 4.4 assists per game last year, though a string of previous injuries have sapped some of his ability. The Knicks could also bring back Rose.

Ian Clark
Clark has been replaced on the Warriors' roster by Nick Young and is now looking for a new team and a big pay day. He's looking for a deal in the $8 million range.

"Any day now, he may sign a multi-year deal with an NBA team for something in the range of $8 million a year," the Tennessean reports. "That’s the target, anyway. Even if Clark and agent Bill Duffy don’t quite get their asking price, he is about to be rewarded."

That asking price seems too high, given how late in free agency it is. The Grizzlies and Lakers have expressed interest and neither team has $8 million in cap space. Wherever Clark signs, he might opt for a one-year deal and re-enter the market next season.