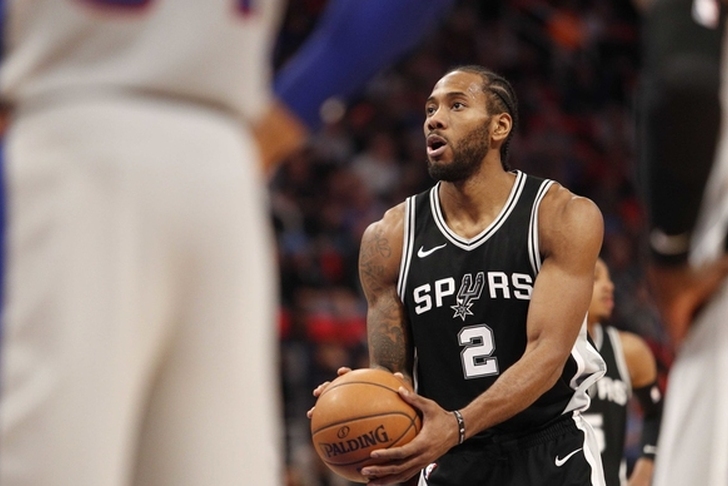 The NBA playoffs tipped off over the weekend with all eight series getting underway. Only two road teams won their respective Game 1's with the New Orleans Pelicans knocking off the Portland Trail Blazers and Indiana Pacers handing LeBron James the first playoff-opening loss in this career. However, there is also plenty of happenings off-the-court as well. Here are all the latest NBA news & rumors you need to know:

Latest on possible Kawhi Leonard trade to Celtics
The San Antonio Spurs have said that they don't expect Kawhi Leonard to return to the team this postseason, setting the stage for him to potentially be traded this offseason. The Boston Celtics are known to be interested in trying to trade for Leonard, and Miami Heat guard Dwyane Wade told Yahoo Sports' Jordan Schultz that he expects Boston to get him.

Kawhi Leonard on the move to the #Celtics?! That's what @DwyaneWade told @Schultz_Report pic.twitter.com/jSZQgFwPWW

Leonard, who averaged 25.5 points, 5.8 rebounds, and 3.5 assists per game last season, will be an unrestricted free agent in 2019 and does not appear to be willing to re-sign with San Antonio.

Donovan Mitchell expected to play in Game 2
Donovan Mitchell recorded 27 points and 10 rebounds in his NBA playoff debut in Sunday's 116-108 loss to the Oklahoma City Thunder, but the star Utah Jazz rookie left the game in the second half due to a foot injury.

However, he will play in Game 2 after X-rays came back negative, according to ESPN's Chris Haynes.

Utah Jazz guard Donovan Mitchell underwent an MRI on his left foot and the results came back negative, league sources tell ESPN. He will play in Game 2 on Wednesday.

"He's got to be more active," Thibodeau said. "You run the floor. Kick the ball out, repost, keep moving around, search it out, get to the offensive board. You've got to sprint around. You learn when teams are double-teaming you -- that's what you have to do. You have to make the right play. You also have to get to positions in which it's difficult for them to double-team you. Transition's a big part of that. You've got to run the floor."

For his part, Towns agreed with his coach.

"I've got to be better on both sides of the basketball," said Towns, who did grab 12 rebounds. "At the end of the day, I trust my teammates full-heartedly that when they get the ball that they can go out there and score every single time. We have such talented players that sometimes the game plan is that. I've got to be better all-around if I'm going to help my teammates out as much as possible."