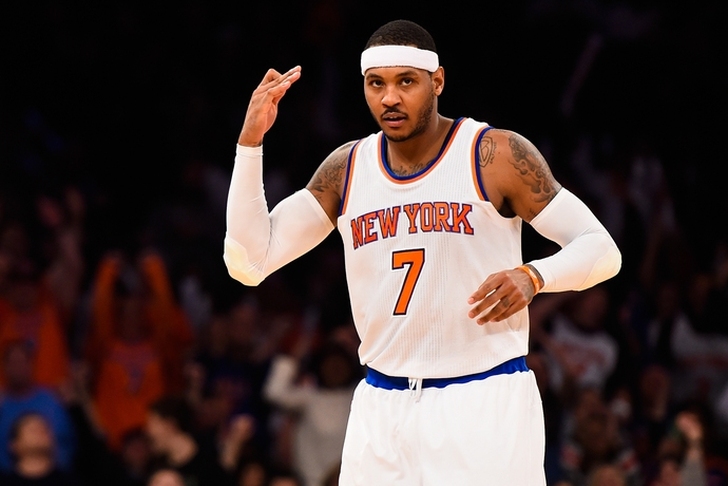 The NBA Finals start today, but for the other 28 teams in the NBA, the focus is on the offseason. The rumor mill is churning with trade rumors, free agency rumors and buzz on some big names. Here are all the latest NBA rumors you need to know from around the association.

Nets, Knicks Want A Trail Blazers Pick
The Trail Blazers have three first round picks this year: their own (No. 15), Memphis' (No. 20) and Cleveland's (No. 26). As a result, they're a popular target for teams looking to acquire a first round pick. Sean Deveney of the Sporting News reports the Blazers are open to shopping a pick or two and that the Brooklyn Nets and New York Knicks are among the teams looking to trade for one.

"The Knicks have inquired about some combination of the Blazers’ picks, a source said, and those talks are ongoing," Deveney writes. "New York has the eighth pick and could trade down for a combination of picks, though the preference for the Knicks is to keep their pick and add one of Portland’s. "The Nets have inquired, too, and that could be interesting because of the Nets’ ability to absorb salary. Brooklyn stands to have about $40 million in cap space next summer, and without much to offer big-time free agents, leveraging that space to accumulate picks with bad contracts would make sense for the Nets."

Portland has several large contracts they could try to move, making the Nets and their $40 million in cap space a perfect match. Players like Meyers Leonard, Moe Harkless and Allen Crabbe (who carries a 15-percent trade kicker) could be dealt by Portland. Any added money give to rookie would increase the luxury tax Portland must pay, since they are already over the luxury-tax threshold.

Melo Wants To Stay In New York?
What happens to Carmelo Anthony will be one of the more intriguing storylines of the NBA offseason. It's clear Phil Jackson doesn't want him in New York anymore, but Anthony's large contract makes any trade difficult. But two former teammates, Iman Shumpert and J.R. Smith, think Carmelo doesn't want to leave.

"Sometimes you feel like it's just unfinished business, and I feel like that's what it is with Melo," Shumpert told the New York Daily News. "He don't want to leave on that note."

"He does want to stay in New York. He made the effort to get to New York," Smith said. "Granted, it hasn't gone as well as he hoped it would. But I'm sure that's where he wants to be."

Who Wants Iggy?
The Golden State Warriors won't have much money to spend this offseason, which could lead to Andre Iguodala finding a new home this offseason. In the event Kevin Durant doesn't take a max deal, the Warriors could afford to re-sign Iguodala. But if not, ESPN reports the Atlanta Hawks, Phoenix Suns and Minnesota Timberwolves are interested in adding Iguodala.

All three teams could use wing help and Iguodala remains a high-level defensive player at age 33. The Timberwolves in particular are a good fit, given their defensive issues.

Celtics Getting Offers For No. 1 Overall Pick
It's assumed the Boston Celtics will take Washington PG Markelle Fultz at No. 1 overall in the NBA Draft, but that hasn't stopped teams from trying to trade for the pick. Celtics president of basketball operations Danny Ainge told the Boston Globe that "a handful of teams" have called about trading for the pick.

If Boston does trade the pick, it would likely come at a steep price given Fultz' talent. Expect Boston to keep the pick and make Fultz the selection on June 22nd.