NBA Rumors: Irving Expected To Be Back For Playoffs, No Timetable For Wall's Return, And Bagley To Declare For Draft 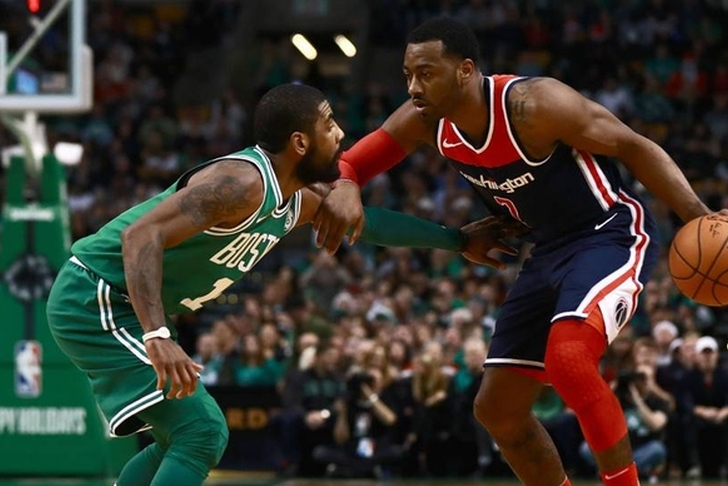 The NBA season is getting really interesting with just over two weeks remaining until the playoffs, making each game more and more meaningful. With competitive races in both the Eastern and Western Conferences, there are a number of injuries to key players on some of the league's best teams.

The Golden State Warriors will be without Stephen Curry for at least their first-round series while the status of another pair of All-Star point guards - Kyrie Irving and John Wall - remain up in the air. Here are all the latest NBA news & rumors you need to know:

Kyrie Irving expected to be back for postseason
Boston Celtics point guard Kyrie Irving was expected to miss another three-to-six weeks after undergoing left knee surgery, but the team is optimistic he'll be able to return for the start of the playoffs, according to Adam Himmelsbach of the Boston Globe.

Hearing that there’s optimism that Kyrie Irving could return either near the start of the playoffs or, on the later end, in a conference semifinals series.

Irving is averaging 24.4 points and 5.1 assists per game this season.

No timetable for John Wall's return
Washington Wizards point guard John Wall has not played since Jan. 25 after undergoing knee surgery, and while he has returned to full-contact practices, there is still no timetable for his return, according to Candace Buckner of the Washington Post.

There is still no timetable set for Wall's return to game action, according to the Wizards. The final decision will be made by Wall and the team's medical staff.

Wall is averaging 19.4 points and 9.3 assists per game this season.

Marvin Bagley expected to declare for NBA Draft
Duke's Marvin Bagley said he was not thinking about this future following the Blue Devils' loss to Kansas in the Elite 8 on Sunday, but ESPN's Jeff Goodman reports that Bagley will declare for the NBA Draft in the coming days.

Multiple sources have told ESPN that he will leave college after one season. The 6-foot-10 Bagley is considered by NBA executives as a high-lottery pick and could even be selected first overall in June's draft.

Bagley, a projected top-three pick, averaged 21.2 points and 11.1 rebounds per game as a freshman for Duke. He was only the second player in ACC history to win both Conference Player of the Year and Rookie of the Year.