NBA Rumors: George "Would Love" To Stay In OKC, Curry Could Come Off Bench, And Latest On Rubio's Injury 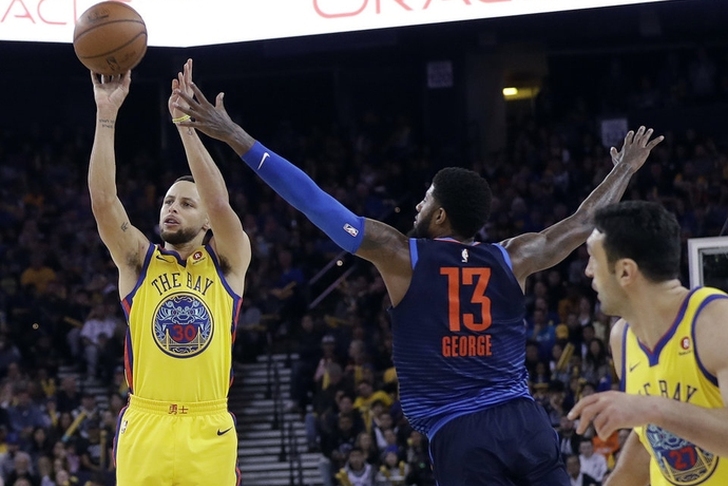 The second round of NBA playoffs tipped off last night with the Golden State Warriors cruising to an easy 121-103 win over the New Orleans Pelicans, while the Boston Celtics advanced to the second round with a 112-96 Game 7 victory over the Milwaukee Bucks. However, there is also plenty of happenings off-the-court as well as teams look towards the offseason and injuries that could impact the rest of the postseason. Here are all the latest NBA news & rumors you need to know:

"There was a lot to be happy about: the fans, the city, the organization," George said. "Everything has been unbelievable. It's too soon. I'd love to remain a Thunder, but that's what this summer is for. We'll address that in the summer."

George has expressed interest in signing with the Los Angeles Lakers dating back to last season and is the reason why the Indiana Pacers traded him to OKC last summer. The Lakers are still expected to heavily pursue George once he hits the open market.

Stephen Curry could come off bench in Game 2
Though Stephen Curry did not play in Golden State's Game 1 win over New Orleans, he is expected to play in Game 2 on Tuesday - and he may even come off the bench, according to Colin Ward-Henninger of CBS Sports.

Kerr says there could be a minutes restriction for Curry on Tuesday, and coming off the bench is a possibility

Ricky Rubio to miss nearly two weeks with hamstring injury
Utah Jazz point guard Ricky Rubio suffered a hamstring injury in their series-clinching Game 6 victory over OKC, but that injury is expected to keep him out for 10 days, according to ESPN's Adrian Wojnarowski.

With an early estimation of 10 days on injury following MRI today, Jazz will be challenged to win against Houston without Rubio -- who has been playing some of the best basketball of his career. https://t.co/oBcacpbfzx