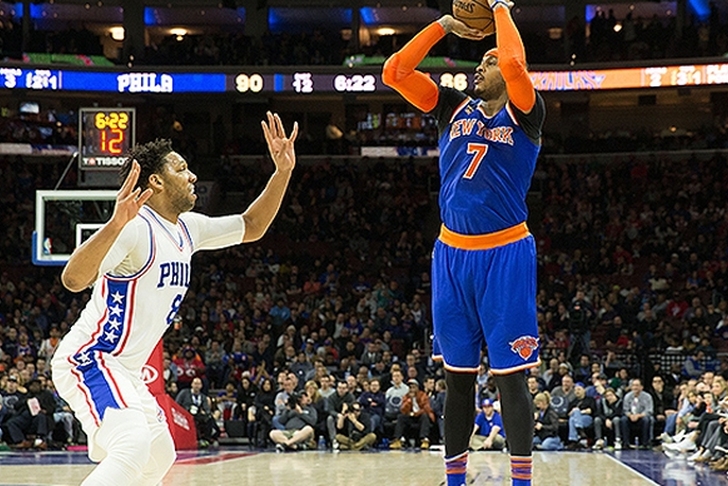 The new NBA is fast approaching with some training camps opening next week and preseason games starting in the first week of October. The trade market is heating up as teams make their final preparations for the new year, and we have updates on a pair of big-name players that could be dealt before the start of the season. Here are all the latest news and rumors you need to know in today's NBA Rumors Roundup:

Carmelo Anthony could be dealt to Rockets by Monday
Carmelo Anthony has been trying to force the New York Knicks to trade him to the Houston Rockets all offseason, telling New York that Houston is the only team he will waive his no-trade clause for. A deal between the two sides was close while Phil Jackson was still president of the Knicks, but no traction has been made since Jackson's firing due to New York's front office's unwillingness to take on the three years and $60 million remaining on Ryan Anderson's contract.

The Knicks told Anthony they are "unwilling to make a bad trade" involving him and want him to consider waiving his no-trade clause for other teams, which he is refusing to do. According to Frank Isola of the New York Daily News, Anthony is still "cautiously optimistic" that he will be traded to Houston by Monday.

Anthony’s camp is cautiously optimistic that a deal will be struck before Monday, and trying not to think about the potential media circus that will take place if Carmelo is still with the Knicks. Two weeks ago, Carmelo’s wife, La La, said the family thought a trade would have been completed by now.

Mentally, Carmelo and his family have moved on to Houston. Reality is another story. Hopefully, Mills and Perry will have the right answers when they address the media on Friday because the Carmelo issue isn’t going away until he goes away.

New York has their media day on Monday before opening training camp next week.

Anthony, who has two years and $54 million remaining on his deal (which includes an opt out after this season), averaged 22.4 points and 5.9 rebounds per game last year.

76ers openly shopping Jahlil Okafor
The Philadelphia 76ers have been trying to trade center Jahlil Okafor since the end of his rookie season, but are now openly talking about trading the former No. 3 overall pick. Head coach Brett Brown said that Okafor will get “every opportunity to earn playing time” while he's in Philly, but confirmed the team is trying to deal him.

“[Team president] Bryan’s [Colangelo] going to do his job,” Brown said. “I’m going to coach him, and we are going to see what goes on with the rest of the league in relation to whatever else is out there. But I’m coaching him like he’s mine.”

Okafor is currently slated to serve as Joel Embiid's backup. However, Embiid is still recovering from offseason knee surgery and has not yet been cleared to return to 5-on-5 scrimmages.

Len was a restricted free agent this summer but did not sign an offer sheet with any team. The 7-foot-1, 260-pounder averaged 8.0 points, 6.6 rebounds and 1.3 blocks in 20.3 minutes per game last season. He appeared in 77 games, including 34 starts.