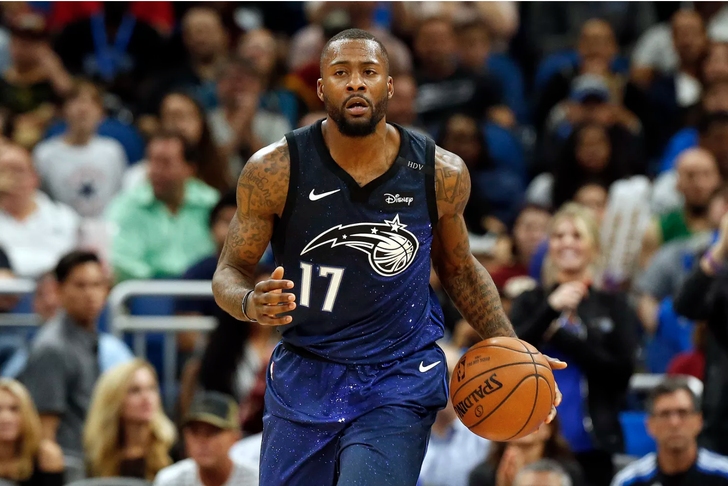 As any die-hard NBA fan knows, no matter how many superstars a team has, without the essential 2-5 "glue guys", the odds to are stacked against them. Looking back at recent championship winners, the 2011 Mavericks had Jason Terry, Deshawn Stevenson and JJ Barea, Lebron’s Heat had Birdman and Shane Battier, Lebron’s Cavs had a once underpaid Tristan Thompson and JR Smith, and the Golden State championship runs had Andre Iguodala and Shaun Livingston.

A common trend found in the career of an effective role player, is that on a different team they don’t find the same success. The potential success of a role player is based on the match between their team’s system and their skill set. There are many players trapped on a team in the midst of a lost season, or backed in a crowded rotation of a playoff team, who if put on a different contender, could potentially be the difference in a playoff series. These are the guys who in a perfect world would get a change of scenery.

Jonathon Simmons SG: Orlando Magic
A proven playoff performer, when Simmons left the Spurs for the Magic it confused the hell out of me. Gregg Popovich used Jonathon Simmons as a quasi-Kawhi Leonard in the playoffs last year with his high energy defense, high flying moves in the lane and 100% effort on every single possession.

When the Spurs got eliminated in the playoffs last season, and Simmons finished the 2017 playoffs with a per 36 of 18.6 PPG, 3.3 AST and 3.5 REBS, I thought he’d for sure resign in San Antonio. However, once he left to Orlando for only 7 million annually, I thought for sure Pop saw something he didn’t like. But, after watching Simmons this season on a lost Magic team, he has been one of the few bright spots.

He’s averaging the most points of his career, 13.9 PPG, while shooting 46.5 percent while crowded in a rotation with Evan Fournier and Mario Hezonja. His defensive numbers are down, but who’s wouldn’t if they went from San Antonio to Orlando? Simmons would be a perfect fit off the bench for teams like Cleveland, OKC and even San Antonio, with the energy he brings on both sides of the ball and his improved scoring ability.

Justise Winslow SF: Miami Heat
A poor man’s Draymond Green, Justise Winslow needs more playing time to unleash his full powers. Although his shot is still under work, Winslow contributes in every other aspect of the game. At 6”7, Winslow may seem a little small to play at the four spot, but ask Miami what they did in Game 7 of their 2015 playoff series with Toronto. With Whiteside out with an injury, Miami played small ball with Winslow playing Center, and he filled the spot well. Winslow was constantly switching onto Bismack Biyombo, Kyle Lowry and Demar Derozan and stayed with all of them. For most of the series his task was Demar Derozan, and Derozan shot 38% during that time.

Offensively, Winslow is a truck while going to the rim, and he could lead a fast break with his underrated ball handling skills. He’s a guy who in big moments you want out on the floor, he’ll never make the wrong play and knows his strengths and weaknesses as well as anybody.

Bobby Portis PF: Chicago Bulls
When the Boston Celtics signed Greg Monroe, they were expecting a guy who would be a monster in the paint, lead their bench unit and score 10 points in a span of five minutes, and frankly it was a good idea until they saw him run. Now imagine someone who could do that, and add a three point shot to that offensive arsenal. Your now imagining Bobby Portis.

Portis has been a bright spot for the Bulls this season. Portis is a prototypical sixth man to come in the game and wreck-havoc for your team. Not only is Portis stuck on a bad team, but Chicago has invested in rookie Lauri Markannen to be their stretch four going forward. Seeing Bobby Portis waste the next few years of his career as a sixth man on a terrible Bulls team averaging 15 PPG would be devastating.

I would love to see Bobby Portis in a Boston Celtics uniform to make up for the failed Greg Monroe project. Plus, if Portis punched another person in the face, it would immediately become the second best uppercut ever thrown in the TD Garden.

Joe Harris SG: Brooklyn Nets
In a league where every team is desperate for floor spacers, it boggled my mind how Joe Harris stayed put at the trade deadline. A four-year player out of Virginia, Harris was already the prototypical Tony Bennett player, he could defend and shoot threes. However, since joining the league he has expanded his offensive game to making plays off the dribble, both inside the paint and around the three-point line. Teams like Golden State who has struggled with bench shooting this season, and Oklahoma City who’s three point shooting numbers have been down, could use a Joe Harris. As the great Bill Simmons once said, “We need Joe Harris in a playoff series.”