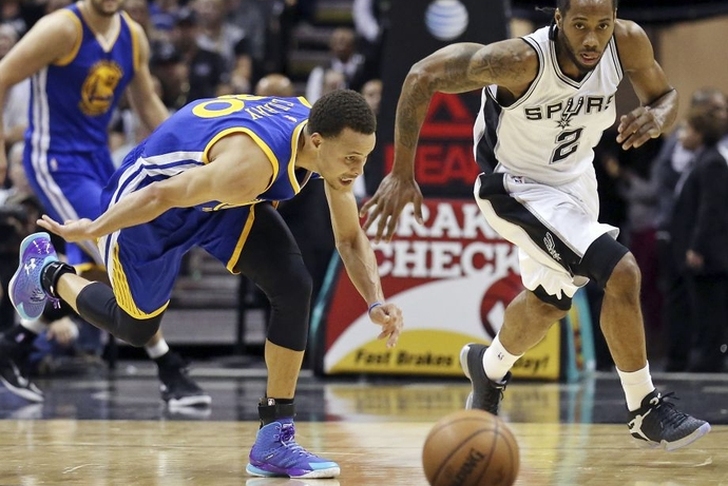 The NBA regular season is just days away with the Cleveland Cavaliers and Chicago Bulls set to open the season on October 27, and we couldn't be more excited about the season ahead. How do all of the teams project to stack up against each other as we head into the new year? Here's our initial 2015-16 NBA Power Rankings:

The defending champs return everyone other than David Lee, and they'll stay in this top spot until anyone knocks them out. They won't have the usual championship hangover as they're determined to prove last year wasn't a fluke - as some other Western Conference contenders (*cough* Clippers) have suggested.

Think your offseason was good? The Spurs added an All-Star (LaMarcus Aldridge) and one of the best veteran big men in the league (David West) to a championship roster.

Kyrie Irving and Kevin Love are getting healthy, and they have everyone back (or will, once they get Tristan Thompson's contract negotiations worked out) from last year's Eastern Conference champions. Oh yeah, and they still have LeBron James.

Quite frankly, the Clippers should've been in the Western Conference finals last year, and added Paul Pierce, Josh Smith, and Wesley Johnson.

The Rockets are back and finally healthy this year, and with the addition of point guard Ty Lawson, they should be better than last year's team that made the Western Conference finals.

Kevin Durant is healthy. Russell Westbrook is healthy. Serge Ibaka is healthy. Yup, the Thunder are going to be really, really good.

The Pelicans are on the rise thanks to the development of Anthony Davis, who is the favorite to win his first MVP this season. Throw in a talented supporting cast led by Jrue Holiday, Tyreke Evans, and Eric Gordon, and the Pelicans could surprise a lot of people this year.

The Hawks won 60 games last year and will be very good again. They did lose forward DeMarre Carroll, but the addition of Tiago Splitter gives them one of the league's best big men rotations.

Memphis' group has been together for years now, using their stingy defense to do well in the postseason. As long as they stay healthy, they'll be in the mix in the West again.

Derrick Rose's health will always be in question, but the play of Jimmy Butler, Pau Gasol, and Joakim Noah are enough to keep them in the top 10.

The Heat have a chance to be a sneaky good team this year by re-signing Goran Dragic and Dwyane Wade while drafting Justise Winslow and signing free agents Gerald Green and Amare Stoudemire.

Milwaukee is one of the best young teams in the league, and will be even better next year with the return of Jabari Parker and the offseason acquisition of big man Greg Monroe.

John Wall and Bradley Beal are still great and are looking to take the Wizards to another level this year, but they still lack overall talent from top to bottom.

Toronto took a small step back last year after getting swept by the Wizards in the playoffs, but Kyle Lowry, DeMar DeRozan, DeMarre Carroll, and Jonas Valanciunas are good enough to get them back there again this year.

The Jazz are coming. Gordon Hayward is perhaps the most underrated player in the league, Rudy Gobert could win Defensive Player of the Year, and they're perhaps the deepest team in the NBA.

Boston has a lot of great role players, but no one that really stands out. Unless they find that guy, they won't get much higher this season.

Dirk Nowitzki is still around and the Mavs brought guards Deron Williams and Wes Matthews to town, but they still lack a second big man to pair with Dirk and a reliable bench.

Paul George is back and healthy, but the Pacers look much different. Roy Hibbert and David West are gone, and they play to make the transition from big-ball to small-ball. Expect there to be growing pains.

Detroit has two good point guards in Reggie Jackson and Brandon Jennings, and a good developing big man in Andre Drummond. However, that's about all they have.

Brandon Knight and Eric Bledsoe are one of the league's best backcourts, but they don't have anyone else they can rely on to produce on a nightly basis.

Many thing the Magic might break through and make the playoffs this season, and rightfully so. Victor Oladipo, Tobias Harris, and Nikola Vucevic are legitimate All-Star contenders and lead a young, deep team. The ingredients for success are there - we just have to see it.

Minnesota has as much potential as anyone in Andrew Wiggins, Zach LaVine, and Karl-Anthony Towns, but they're still a year or two away from converting that potential into tangible on-court talent.

The Kings are the most dysfunctional franchise in the sport. DeMarcus Cousins is an All-Star, but we're counting down the days until he gets into a fight with Rajon Rondo or George Karl.

Yawn. Charlotte plays good defense, but can't hit a shot from behind the three-point line to save their lives. Expect another middling season from this group of "better-than-bad-but-not-good-enough-for-the-playoffs" players.

It doesn't look like, but the Knicks are improving. Carmelo Anthony is back and free agent additions Arron Afflalo and Robin Lopez will help, but not enough to make a huge difference.

The Nuggets are in the early stages of their rebuilding process, and won't have much success this season. However, rookie point guard Emmanuel Mudiay will be a lot of fun to watch.

What a mess. Kobe Bryant is the Lakers' only hope as this season is more about seeing how LA's young players - specifically Julius Randle and D'Angelo Russell - mesh together.

Brook Lopez is an All-Star, but the Nets have nothing else going for them as they start a rebuilding process of their own. Expect them to trade Joe Johnson by the deadline.

Damian Lillard is the only starter returning from last year's playoff team, and this young team will need some time to grow and develop together before competing for the playoffs again.

Jahlil Okafor is the favorite to win Rookie of the Year, but the rest of the roster is still very much a work in progress.