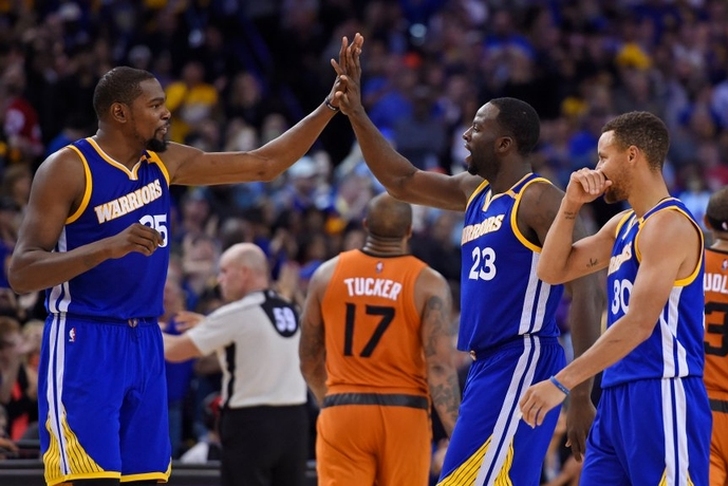 We're already a quarter of the way through the NBA regular season, and we've already seen several surprising teams this year while other would-be contenders might be destined for the lottery this year. How do all of the teams stack up against each other so far this season? Find out in our NBA Power Rankings:

1) Golden State Warriors (18-3)
The Warriors saw their 12-game win streak end on Thursday in a loss to the Houston Rockets, but the streak showed how dominant this group already is. They also have the most wins and fewest losses in the league.

3) Los Angeles Clippers (16-6)
LA's slide has knocked them out of the top spot, losing four of their last six games.

4) Cleveland Cavaliers (15-5)
Speaking of the Cavs, they are in the midst of a three-game slide. There isn't much to be concerned with, though - we know they'll be ready for the playoffs.

5) Toronto Raptors (14-7)
Toronto continues to re-establish themselves as one of the league's top teams, currently racking up a 5-game winning streak with wins over the Rockets, Grizzlies and Lakers.

6) Houston Rockets (14-7)
Houston is surging, winning eight of their last 10 games, including that impressive 2OT win over the Warriors on the road.

7) Oklahoma City Thunder (14-8)
The Russell Westbrook triple-double tour continues, and he has led OKC to a six-game win streak.

8) Charlotte Hornets (12-9)
Charlotte continues to keep plugging away. A four-game losing streak sent them crashing back down the Earth, but they have since won four of their last six games.

9) Utah Jazz (13-9)
Like the Hornets, Utah reeled off a four-game winning streak after a four-game losing streak. Overall, they have won six of their last seven games.

10) Memphis Grizzlies (14-8)
Memphis has taken a slight step back with Mike Conley out due to injury, but if they can just maintain their pace, they'll be in great position to make the playoffs.

11) Chicago Bulls (11-9)
After a four-game winning streak, the Bulls are just 3-5 over their last eight games. However, the win over the Cavs shows how good this team has the potential to be.

12) Boston Celtics (12-9)
Boston has picked up some wins against an easier part of their schedule, even without Al Horford for a majority of their games. Can his return give them another boost?

13) New York Knicks (11-9)
Don't look now, but here come the Knickerbockers, who have rebounded from a 2-5 start. They have won eight of their last 11 games.

15) Portland Trail Blazers (12-10)
Portland just won back-to-back games for the first time since Nov. 13, but are 29th in the league in points allowed per game. They're hoping this is the start of a turnaround.

16) Los Angeles Lakers (10-13)
The Lakers showed promise early in the season. Now, they're starting to show their youth, losing nine of their last 13 games.

17) Detroit Pistons (11-11)
Detroit has played well without starting point guard Reggie Jackson, and are now finding their rhythm, winning five of their last seven games. Jackson will be returning in the next few days, making them even more dangerous.

19) Indiana Pacers (10-11)
Indiana has been extremely inconsistent all season, but the return of Paul George should help.

20) Sacramento Kings (7-13)
Sacramento is quietly playing much better basketball, but they haven't been able to sustain any kind of success. They do have wins over the Thunder and Raptors on their resume.

21) Denver Nuggets (8-13)
Denver has been streaky all year, and are in the midst of a down spell right now, losing five of their last seven games.

22) Orlando Magic (9-12)
Orlando snapped a four-game losing streak by beating the Spurs, and have now won three of their last four games. Still, they've done nothing to instill any confidence in them.

23) New Orleans Pelicans (7-15)
New Orleans has been a much different team since point guard Jrue Holiday returned, winning five of their last 10 games. However a loss to the lowly Mavericks has damped the optimism surrounding them.

24) Miami Heat (7-13)
Miami has managed to regain their footing after an early-season slide, but like most younger teams, are still struggling with consistency.

25) Washington Wizards (7-12)
Washington has been a trainwreck. This team was supposed to have a bounce back year, but they have been awful on all fronts. They might need to move on from the John Wall-Bradley Beal dynamic and start another rebuild.

26) Minnesota Timberwolves (6-14)
Minnesota's defense has been surprisingly bad this season, and is the biggest reason why they've lost seven of their last nine games. They've been a real disappointment.

27) Brooklyn Nets (5-15)
Brooklyn is bad again, but they're a different kind of bad than they were last season. They're competitive in virtually every contest, but have still lost 10 of their last 11 games.

28) Phoenix Suns (6-14)
A large majority of Phoenix's games have been played on the road. However, all of their losses have come in streaks - they have yet to win immediately following their first loss in a row.

29) Philadelphia 76ers (4-17)
Philadelphia Is still bad, but there is hope. Joel Embiid is a star in the making, Dario Saric has shown a lot of promise, and they're still without Ben Simmons. They're a young team just learning how to win.

30) Dallas Mavericks (4-16)
Dallas has not shown many signs of life this season as they try to break in several new players and are dealing with injuries to Dirk Nowitzki and Deron Williams. Quite frankly, they've been this season's biggest disappointment.