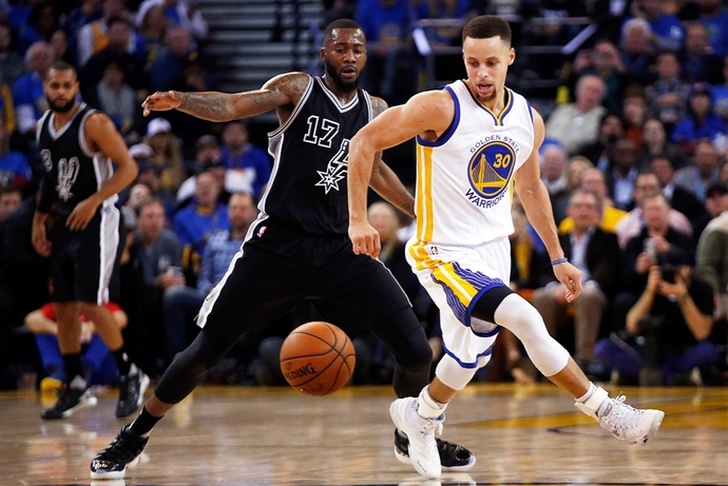 We're nearly two whole months into the NBA season, and we've already seen several surprising teams this year while other would-be contenders might be destined for the lottery this year. How do all of the teams stack up against each other so far this season? Find out in our NBA Power Rankings:

1) Golden State Warriors (23-4)
Not a whole lot you can say here about the Warriors other than they are who we thought they were. Kevin Durant and all of their new pieces have meshed incredibly well together already, asserting themselves as the best team in the league.

2) San Antonio Spurs (21-5)
The Spurs lost their first road game of the season against the Bulls, but as the only other team with 20 wins, they have shown themselves to be head and shoulders above most of the rest of the league - again.

3) Cleveland Cavaliers (18-6)
If it wasn't for the Cavs resting players, they may only have three or four losses on the season. They're a team that knows they're the best in the East, and are playing like it.

4) Houston Rockets (19-7)
Where did these Rockets come from? An eight-game winning streak has them challenging the Clippers for the third-best team in the West - and getting them a whole lot of respect from the rest of the league.

5) Los Angeles Clippers (19-7)
LA has righted the ship after a tough stretch, but they haven't shown any improvement from the last few years.

6) Toronto Raptors (18-7)
Toronto continues to re-establish themselves as one of the league's top teams, but a lack of quality wins has kept them from getting over the hump and joining that top group above them.

7) Memphis Grizzlies (18-9)
With Mike Conley and Chandler Parsons hurt, Memphis has found a way to win seven of their last eight games. Once again, their hard-nosed style of play is something no team wants to face.

8) Utah Jazz (16-10)
Another team that has been dealing with injuries, the Jazz are starting to get healthy. Gordon Hayward, Rodney Hood and Gordon Hayward are all back and healthy, meaning this team should take off.

9) Oklahoma City Thunder (15-11)
The Russell Westbrook takeover is a real thing - but when he doesn't have a triple-double, they lose. That's a lot of pressure to put on someone.

10) Boston Celtics (13-12)
Without Isaiah Thomas, Boston suffered close losses to the Raptors, Thunder and Spurs. While all losses, the Celtics still showed their grit without their leading scorer.

11) Detroit Pistons (14-13)
Detroit got off to a solid start without Reggie Jackson, and with their starting point guard back in the fold, they have won six of their last nine games.

12) New York Knicks (14-12)
Don't look now, but here come the Knickerbockers, who have rebounded from a 2-5 start. They have won six of their last nine games.

13) Milwaukee Bucks (12-12)
Led by Giannis Antetokounmpo and Jabari Parker, the Bucks look like they could develop into a dangerous team. However, a win over the Bulls on Thursday snapped a three-game losing streak.

14) Chicago Bulls (13-12)
Chicago has started to slow after a hot start, losing five of their last seven games. They seem to be regressing into the team we thought they would be in the preseason.

15) Charlotte Hornets (14-12)
Charlotte went 0-3 this last week, with all three losses coming on the road. They are right in the mix of this group of teams in the middle of the Eastern Conference playoff picture, but they need to get more consistent.

16) Indiana Pacers (13-14)
Indiana has been extremely inconsistent all season, trading wins and losses over the last nine games.

17) Portland Trail Blazers (13-15)
Portland has fallen well short of their preseason expectations, and are now just fighting to make the playoffs. It doesn't help that the Blazers have lost five of their last six games.

19) Washington Wizards (10-14)
Washington is no longer the trainwreck they were at the start of the season, but they have struggled to gain any footing. They haven't won more than two games in a row at any point this season.

20) Denver Nuggets (10-16)
Despite having some talented players, Denver doesn't really seem to know what direction they're going in. Constant lineup shakeups have led to inconsistency all season long.

21) Sacramento Kings (9-16)
Sacramento is quietly playing better basketball, but they haven't been able to get over the hump, losing six of their last eight games.

22) Orlando Magic (11-16)
Orlando has major defensive issues and no go-to offensive player, causing them to lose four of their last five games after they appeared to turn their season around.

23) New Orleans Pelicans (9-18)
The return of point guard Jrue Holiday had New Orleans getting close to .500 - then the Pelicans lost eight of their last 11 games. Alvin Gentry's tenure isn't likely to last much longer.

24) Phoenix Suns (8-18)
A large majority of Phoenix's games have been played on the road, and they're starting to improve their record now that they've gotten more games at home, winning two games in the past week.

25) Miami Heat (9-17)
Miami is in full-on rebuilding mode and are still struggling with consistency, losing five of their last seven games.

26) Los Angeles Lakers (10-18)
The loss of D'Angelo Russell has killed all the momentum LA had early in the season, as they have lost eight games in a row and 11 of their last 13 overall.

27) Minnesota Timberwolves (7-18)
Minnesota's defense has been surprisingly bad this season, and is the biggest reason why they've lost 11 of their last 14 games. They've been a real disappointment.

28) Brooklyn Nets (7-17)
Brooklyn is bad again, but they're a different kind of bad than they were last season. They're competitive in virtually every contest, but have still lost five of their last seven games.

29) Dallas Mavericks (6-19)
Dallas has not shown many signs of life this season as they try to break in several new players and are dealing with injuries to Dirk Nowitzki and Deron Williams. Quite frankly, they've been this season's biggest disappointment.

30) Philadelphia 76ers (6-19)
Philadelphia Is still bad, but there is hope. Joel Embiid is a star in the making, Dario Saric has shown a lot of promise, and they're still without Ben Simmons. They're a young team just learning how to win.