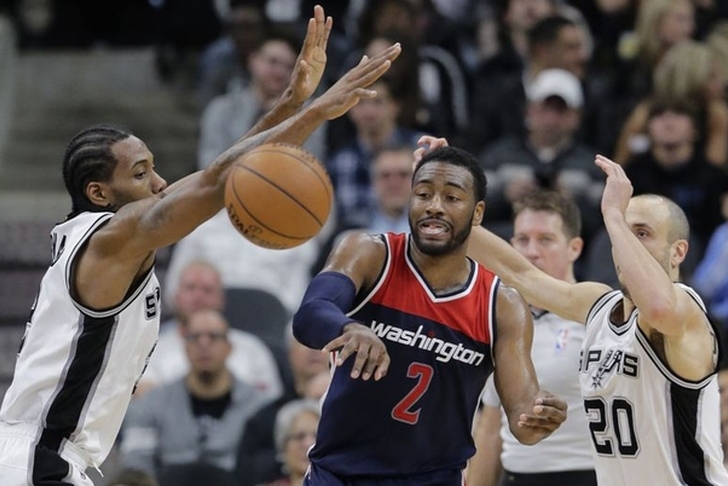 There is roughly a month left in the NBA season, and the season is starting to get really fun. With the Warriors and Cavs struggling, the inevitable Finals rematch doesn't feel as inevitable, and surging teams like the Wizards, Rockets and Heat and created more intrigue around the upcoming playoffs. How do all of the teams in the league stack up against going into the final few weeks of the regular season? Find out in our NBA Power Rankings:

1) San Antonio Spurs (52-14)
The Spurs are just a half game behind the Warriors for the best record in the NBA, and have beaten the Rockets, Warriors and Hawks in their past five games. Right now, they're the best team in the league.

2) Washington Wizards (41-25)
Not far behind, Washington's hot streak shows no end of stopping anytime soon. They won four games in five nights this week and have the league's best record since the start of 2017.

3) Houston Rockets (46-21)
Losses to the Jazz and Spurs were troubling for Houston this week, but bounced back with a big time win over the Cavaliers. They're still playing at a high level.

4) Cleveland Cavaliers (44-22)
Speaking of the Cavs, Cleveland is a funk, losing four of their last six games and six of their last 10 overall. That said, they're still in first in the East and are continuing to deal with injuries, including to Kevin Love.

5) Golden State Warriors (53-14)
Golden State has fallen off a cliff since Kevin Durant's injury, going 3-5 in the eight games since. That's alarming for a team that lost just nine games all of last season. Still, they have the best record in the league, which is enough to keep them in the top five.

6) Boston Celtics (42-25)
Boston has very recent wins over the Warriors and Cavs, but have also lost to some of the worst teams in the league (Nuggets, Suns). They've confirmed themselves as one of the better teams in the league, but aren't quite elite.

7) Miami Heat (32-35)
Miami has lost just five times since Jan. 13 and are now just two games out of the No. 6 spot in the Eastern Conference. That's a turnaround for the ages.

8) Oklahoma City Thunder (38-29)
OKC goes through stretches of dominance where they reel off short winning streaks, followed by short losing streaks. They're still overly reliant on Westbrook putting up triple-doubles, but have won three games in a row - including victories over the Spurs and Jazz.

10) Los Angeles Clippers (40-27)
The Clippers have won four of their last six games, beating the Grizzlies, Celtics and Spurs during that span. Still, they're looking to establish consistency ahead of the postseason.

11) Atlanta Hawks (37-30)
Another inconsistent team, the Hawks seem to have found their stride, winning three of their last four over the Nets, Raptors and Grizzlies..

13) Toronto Raptors (39-28)
Toronto is faltering of late, losing four of their last seven games to some average competition. Can they turn it around before the playoffs?

14) Milwaukee Bucks (32-34)
The Bucks were trending up, winning six of their last seven games to put themselves in the mix of that race for the final three playoff spots in the East.

15) Indiana Pacers (34-33)
The Pacers continue to be excellent at home, but road woes have caused them to lose 11 of their last 16 games.

16) Dallas Mavericks (28-38)
Led by a starting backcourt of Yogi Ferrell and Seth Curry, and Mavs have won six of their last nine games. Rick Carlisle deserves an award for the job he has done with this team.

17) Memphis Grizzlies (37-30)
Memphis is fading at the wrong time, losing six of their last seven games to fall to the No. 7 seed in the West. Two of those losses were to the Nets and Mavs, both of which really sting.

18) Minnesota Timberwolves (28-38)
Minnesota has been great since the All-Star break, going 6-3 in that span with wins over the Wizards, Warriors, Clippers and Jazz. It looks like this young team is starting to figure it out.

19) Chicago Bulls (32-35)
Another team in a freefall, the Bulls have lost five of their last six games, dropping them out of the playoff picture in the East.

20) Denver Nuggets (32-35)
Denver is close to locking themselves into the final playoff spot in the West, winning six of their last eight games.

21) Portland Trail Blazers (29-37)
Portland is holding onto hope they can catch Denver and make the playoffs, winning five of their last seven games.

23) Phoenix Suns (22-45)
The Suns have struggled to find their footing all season long but have somewhat turned it around of late, winning four of their last seven games.

24) Charlotte Hornets (29-38)
Charlotte is one of these teams that are absolutely fooling themselves into thinking they're a contender for a playoff spot. They are just 10-23 in the new year - that's not good.

25) New Orleans Pelicans (27-40)
The Pelicans should be better, but are starting to find their footing with DeMarcus Cousins in tow, winning three of their last five games.

26) Philadelphia 76ers (24-43)
Philadelphia Is still bad, and are going to be bad for the rest of the season without Joel Embiid. But this year has given the Sixers hope - which is all they were looking for this year.

27) Los Angeles Lakers (20-47)
We knew the Lakers would be bad, and even if their record is worse than anticipated, this young group has shown flashes of promise. They're benching their older players down the stretch to give their young guys some experience.

28) Orlando Magic (24-44)
At the start of the 2015-16 season, the Magic were thought of as one of the hot young teams in the East. Now, they have won just nine games since Jan. 1 and are one of the worst teams in the league. Life comes at you fast.

29) Sacramento Kings (26-41)
Sacramento snapped an eight-game losing streak by beating the Magic on Monday. They have been as bad as we thought they would have been without Boogie Cousins.

30) Brooklyn Nets (12-54)
Brooklyn is terrible, have the least amount of talent in the league and have no chance of really getting it turned around soon.