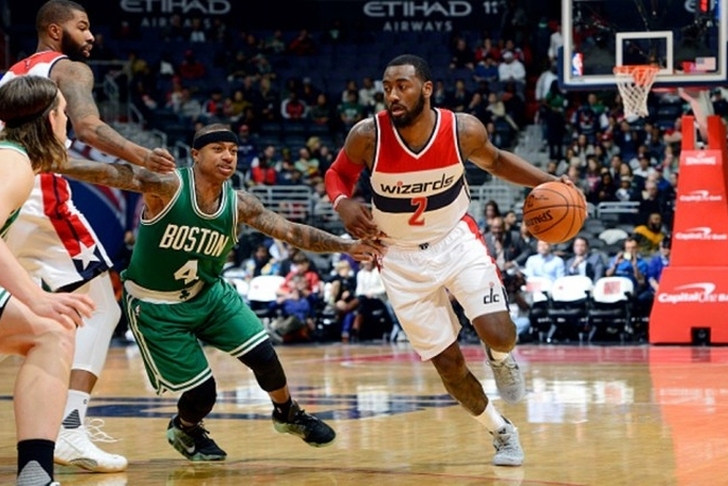 We're just one week away from the NBA All-Star Game, and contenders have separated themselves over the first half of the season. Seven teams in the Western Conference look like playoff locks, while the East is a jumbled mess after the top two teams. How do all of the teams in the league stack up against each other so far this season? Find out in our NBA Power Rankings:

1) Golden State Warriors (46-8)
Not a whole lot you can say here about the Warriors other than they are who we thought they were. Kevin Durant and all of their new pieces have meshed incredibly well together, asserting themselves as the best team in the league.

2) San Antonio Spurs (41-13)
The Spurs are quietly lurking behind the Warriors in 2nd in the West, but are just 14-7 in the new year. It seems like they've hit a bit of a mid-season lull. Some of that can be attributed to Pau Gasol, who is out with a broken finger until after the All-Star break.

3) Houston Rockets (40-17)
The Rockets have cooled off after their hot start, but James Harden - who has scored 40+ points in three of the last five games - is keeping Houston among the league's best.

5) Cleveland Cavaliers (37-16)
Cleveland is dealing with an abnormal rash of injuries, but when healthy they're as good as anyone - shown by that Christmas Day win over the Warriors. Still, hard to discount their 7-8 mark in January.

6) Washington Wizards (32-21)
Washington is as hot as any team in the league, winning 13 of their last 15 games to move into one of the top four seeds in the East.

7) Utah Jazz (34-21)
Another team that has been dealing with injuries all year, Utah seems to have found their stride, winning four of their last six games.

8) Memphis Grizzlies (33-23)
Memphis continues to overachieve, winning six of their last eight games - a stretch that includes wins over Utah and San Antonio.

9) Los Angeles Clippers (33-21)
The Clippers are definitely not the same team without Chris Paul, and it's clear they need him back to be competitive. They have lost seven of their last 11 games.

10) Oklahoma City Thunder (31-24)
Like Memphis, OKC goes through stretches of dominance where they reel off short winning streaks, followed by short losing streaks. They're in the midst of the latter now, losing five of their last eight games.

11) Atlanta Hawks (31-23)
The Hawks have failed to gain any consistency after their long winning streak in January, going 5-5 in their last 10 games.

12) Toronto Raptors (32-22)
Toronto has fallen off a cliff of late, losing nine of their last 13 games. They're starting to look more like an average playoff team than someone who can compete with the Cavs.

13) Indiana Pacers (29-25)
Indiana has quietly risen to a position among the top five seeds in the East, but have followed up a seven-game losing streak with a three-game losing skid.

14) Miami Heat (24-31)
Miami won 13 games in a row, more than anyone else this season, before falling to the 76ers in the second game of a back-to-back. It looks like this team has figured something out.

15) Detroit Pistons (25-29)
Detroit is another team that has failed to really gain any kind of footing this season, going 4-5 in their last nine games.

16) Chicago Bulls (26-29)
Chicago may be a mess off the court, and that has started to make it's way on the court where the Bulls have lost four of their last five games.

17) Denver Nuggets (24-30)
Denver just made a trade to acquire Mason Plumlee for the Blazers to help their playoff push, as they currently sit eighth in the West.

18) Portland Trail Blazers (23-31)
Portland got Jusuf Nurkic in return for Plumlee, giving them a rim protector they desperately need. They're also a game behind the Nuggets for the No. 8 spot.

20) Charlotte Hornets (24-30)
Unlike the past couple of teams ahead of them, Charlotte got off to a tremendous start (they led the Eastern Conference 10 games into the season). They have since fallen off dramatically, losing 14 of their last 18 games overall.

21) Sacramento Kings (22-32)
Sacramento is still extremely inconsistent, but have won three of their last four games to remain in striking distance of that final playoff spot in the West.

22) New York Knicks (23-33)
The sky is falling in the Big Apple. Amidst rumors of Carmelo Anthony potentially being traded and the Charles Oakley fiasco, the Knicks have lost six of their last eight games.

23) Milwaukee Bucks (23-30)
The Bucks were trending up, and then Jabari Parker tore the ACL in his left knee for the second time in his three-year career. They have lost 12 of their last 15 games.

24) New Orleans Pelicans (21-33)
The Pelicans are playing much better than they were at the start of the season, but that isn't necessary resulting in consistent winning. They have lost five of their last seven games.

25) Minnesota Timberwolves (20-34)
Minnesota's defense has been surprisingly bad this season, and is the biggest reason why they've lost five of their last seven games. They're still a very young team, and they are playing like it.

26) Philadelphia 76ers (20-34)
Philadelphia Is still bad, but there is hope. Joel Embiid's slightly torn meniscus is cause for concern, and they have come back down to earth a bit (lost seven of their last 10 games), but the Sixers are FINALLY moving in the right direction.

27) Orlando Magic (20-36)
Orlando's is quickly turning into one of the league's worst teams, winning just five games since Dec. 26.

28) Los Angeles Lakers (19-37)
We knew the Lakers would be bad, and even if their record is worse than anticipated, this young group has shown flashes of promise.

30) Brooklyn Nets (9-45)
Brooklyn is bad again, but they're a different kind of bad than they were last season. Even though they've shown some fight, their talent level is just so much lower than everyone else in the league.