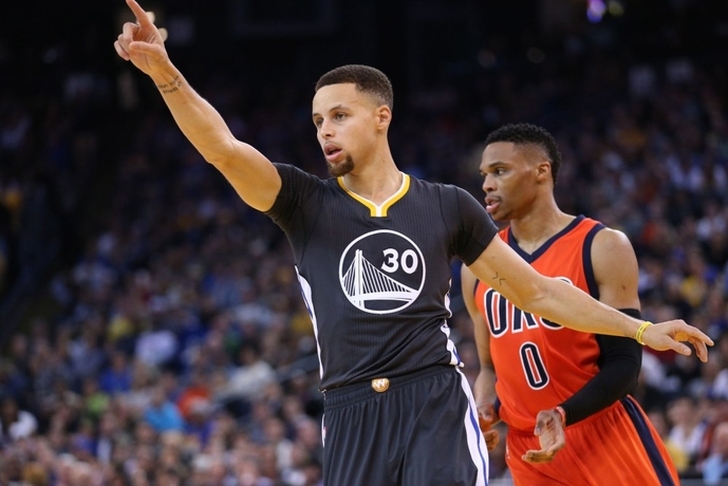 We're already at the All-Star break, and it's become abundantly clear that everyone in the league is chasing the Golden State Warriors. While the defending champs are head and shoulders above everyone else, there are several other teams surging up the standings - and others dropping fast. See where your team ranks  in our newest NBA Power Rankings:

1) Golden State Warriors (48-4)
The Warriors are on a blistering pace, and just need to go 25-5 down the stretch for them to set the NBA record for best regular season. They won't leave the top spot for the rest of the season.

2) San Antonio Spurs (45-8)
The Spurs have also distanced themselves from the rest of the NBA - though they aren't quite on Golden State's level. Still, they haven't lost at home this season and are off to the best start in franchise history.

4) Cleveland Cavaliers (38-14)
Cleveland's mid-season coaching change hasn't slowed them down at all, bit it appears they're still a step behind the top three teams in the West.

5)  Toronto Raptors (35-17)
Toronto is as hot as anyone in the league and are starting to challend the Cavs for the top spot in the East, winning 14 of their last 16 games.

6) Los Angeles Clippers (35-18)
LA is a remarkable 18-5 without Blake Griffin, and while they've put themselves in position to secure home court in the playoffs, they are clearly the No. 4 team in the West.

7) Boston Celtics (32-23)
Boston has finally started to gain footing and are challenging the upper echelon in the East, winning eight of their last 11 games.

8) Memphis Grizzlies (31-22)
Memphis sits in this spot because of the tremendous surge they're on, but losing center Marc Gasol for the season with a broken foot could force them into a tailspin and potentially miss the playoffs altogether.

9) Atlanta Hawks (31-24)
Atlanta is considering blowing up their core group at the trade deadline as they don't view themselves as contenders, but they're still one of the better teams in the East.

10) Miami Heat (29-24)
Miami has lost ground on the other top teams in the East, losing three of their last five games.

11) Detroit Pistons (27-27)
Detroit limped into the All-Star break on a three-game losing streak, but they should still end their playoff drought this year.

13) Utah Jazz (26-26)
Utah has surged into the Western Conference playoff picture before the break, winning seven of their last eight games.

14) Houston Rockets (27-28)
Houston dropped back below .500 by losing six of their last eight games before the break, and now they're reportedly shopping disgrunted center Dwight Howard.

15) Dallas Mavericks (29-26)
The Mavs have been stuck in mediocrity over the past few weeks and are limping into the All-Star break, losing four of their last five games.

16) Chicago Bulls (27-25)
Just as Chicago was looking like a legitimate challenger to Cleveland in the East, they've bottomed out, losing 13 of their last 18 games.

17) Portland Trail Blazers (27-27)
Portland is a young team showing promise and are perhaps the biggest surprise of the NBA, winning 12 of their last 15 games.

18) Charlotte Hornets (27-26)
Charlotte has been ravaged by injuries over the past month but has surged back to above .500 before the break, winning five of their last six games.

19) Washington Wizards (23-27)
The All-Star break is coming at the right time for the Wizards, who have lost six of their last nine games.

20) Denver Nuggets (22-32)
Denver has been better than expected this season and are moving in the right direction, winning four of their last six games.

21) Sacramento Kings (17-23)
Sacramentowas riding high after reaching the No. 8 spot in the West, but they've lost eight of their last 10 games since. Oh yeah, and they almost fired their head coach because of it.

23) New Orleans Pelicans (20-32)
New Orleans is struggling to put the pieces together after their awful start, losing four of their last six games.

24) Orlando Magic (23-29)
Orlando looked ready to make a surge up the Eastern Conference standings two weeks ago, but have been absolutely reeling since the calendar flipped to 2016, going 4-16 over their last 20 games.

25) Milwaukee Bucks (21-32)
Milwaukee has failed to deliver on their preseason expectations and are sliding way back in the Eastern Conference, losing seven of their last nine games.

26) Minnesota Timberwolves (17-37)
Minnesota closed the first half of the season strong, winning three of their last four games - but that came after a 1-7 stretch.

27) Brooklyn Nets (14-40)
Brooklyn is the best of the four teams that are clearly below everyone else in the league. Still, they're not very good.

30) Phoenix Suns (14-40)
Phoenix is an absolute mess right now, and firing head coach Jeff Hornacek didn't help. They enter the All-Star break on a nine-game losing streak and only have two wins since Dec. 18.