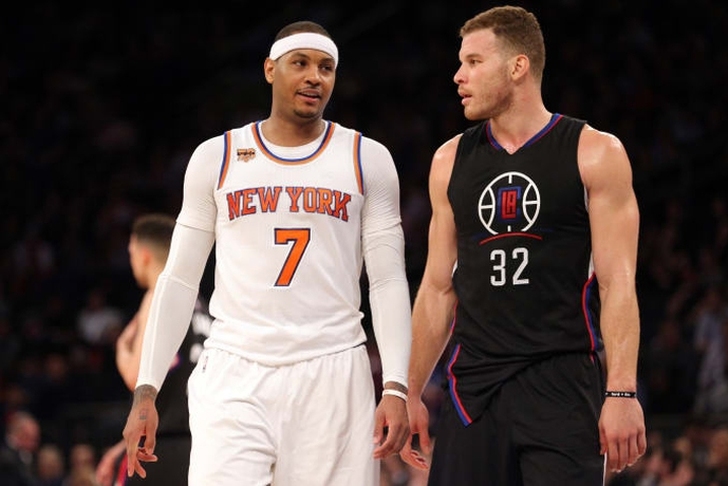 The start of NBA free agency isn't until the weekend, but we have already seen plenty of fireworks. Phil Jackson was fired by the New York Knicks early Wednesday morning, yet that news was trumped by the Los Angeles Clippers trading Chris Paul to the Houston Rockets, which is having a domino affect on other teams. What other rumors are flying around the league? Here's the latest you need to know:

Carmelo Anthony only leaving Knicks for two teams
Even though Jackson is no longer running the team, the New York Knicks are still looking to trade Carmelo Anthony instead of reaching a buyout agreement.

Anthony controls his future thanks to a no-trade clause in his contract, and has his sights set on two teams. According to ESPN's Stephen A. Smith, Anthony would waive that no-trade clause for the Rockets, but would also accept a buyout to join the Cleveland Cavaliers.

Update @Espngreeny. Found out last night Melo would accept buyout to go to @cavs, too. To @HoustonRockets? Would possibly be via trade!

Houston is trying to acquire a third star to play alongside Chris Paul and James Harden following their trade for Paul.

Clippers focused on retaining Blake Griffin, who is expecting five-year max deal
The Los Angeles Clippers have no plans of an immediate rebuild after trading Chris Paul, and now have turned their full attention to re-signing Blake Griffin. According to ESPN's Ramona Shelburne, it will take a five-year max deal for Griffin to return to the Clippers.

With Chris Paul headed to the Houston Rockets, the LA Clippers will turn their attention to keeping Blake Griffin, a source told ESPN's Ramona Shelburne.

The Clippers are of the understanding that it will take a five-year deal to keep Griffin, a source told Shelburne.

Complicating the matter however, sources told ESPN's Michael Eaves, is that Griffin may not be ready for the start of the next season and could possibly be out until December due to a toe injury that cut short his postseason.

A separate source told Shelburne the team believes Griffin's toe will be healed and he'll likely be ready for the start of the season.

The Oklahoma City Thunder, Miami Heat and Boston Celtics are all known to be interested in Griffin, who averaged 21.6 points, 8.1 rebounds and 4.9 assists per game last season.

Oklahoma City Thunder targeting Rudy Gay
There has been limited interest in free agent small forward Rudy Gay, but the Thunder appear to be targeting him on the open market, according to Adrian Wojnarowski of The Vertical.

OKC had a deal in place to acquire Gay from the Sacramento Kings prior to last season, but the deal fell through when backup point guard Cameron Payne suffered an injury in summer league. Gay averaged 18.7 points and 6.3 rebounds in 30 games last season.