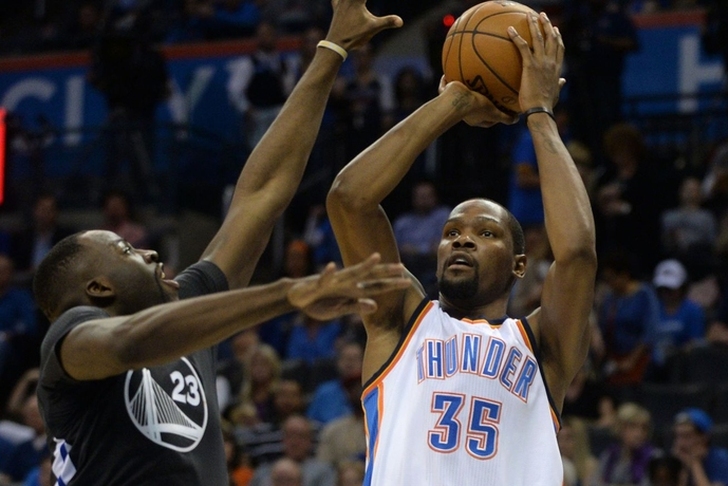 NBA Free Agency is only a few days old and players can't officially sign contracts until July 7th. However, many of the big names have agreed to deals and we have a good idea of which teams are the biggest winners and losers so far.

Much can still change, especially if a player pulls a DeAndre Jordan. We've limited the list to five winners and five losers. Teams only as well, since a ton of players are winners thanks to the rising salary cap. With that in mind, here are five winners and losers from NBA free agency so far.

Golden State Warriors
Obviously, right? The Warriors landed Kevin Durant, making an already great team even better. Sure, it cost them Andrew Bogut and their entire bench outside of Shaun Livingston, but it's totally worth it. The Warriors also landed Zaza Pachulia on a $2.9 million deal. He could have fetched at least four times that in this year's market. Getting David West for the veteran minimum was another borderline-unfair steal. The Warriors are the obvious winners.

Boston Celtics
Boston didn't land Durant and they didn't swing a trade for a superstar during the draft. But this offseason has been a success. They managed to land Al Horford, the biggest free agent addition to the team in years. (Remember, Kevin Garnett and Ray Allen were trades). They kept their assets and are near the top of the Eastern Conference.

San Antonio Spurs
Much like the Celtics, the Spurs missed out on Durant. The Warriors are still the favorites, but the addition of Pau Gasol was a critical one for the Spurs. He'll play a key role and it was a needed addition for San Antonio. It's unclear if either David West or Tim Duncan will return next year. They also didn't overpay for Gasol, something that hasn't been the case for many teams adding bigs this offseason. The Spurs' offseason isn't as great as it was last year, but it's still a success.

New York Knicks
Even ignoring the trade for Derrick Rose, the Knicks' offseason has been a success. Giving Joakim Noah $72 million over four years is a massive risk, but it's not much more than the other free agent bigs netted and the Knicks badly need a center. Courtney Lee will never be an All-Star, but four years and $50 million in this market is fair value. He fills a major need at center. Getting Brandon Jennings for just $5 million was a complete steal. Bringing back Lance Thomas was also a shrewd move. The Knicks should be a playoff team next year.

Dallas Mavericks
There's an argument that the Mavs could be in the loser's category, and they certainly were after the first few days. It seemed like this would be another season of the Mavs missing out on their top targets after they failed to land Hassan Whiteside. But after Durant went to the Warriors, the Mavs managed to land a few players. Giving Harrison Barnes a max deal is a major risk, but he still has potential and could thrive in a bigger role. Getting Seth Curry for a meager $3 million was a complete steal. The netted Andrew Bogut in a trade basically for free and kept Dirk Nowitzki. The Mavs' free agency wasn't as great as some of the others' this year, but it's a whole lot better than previous ones and much better than it could have been.

Oklahoma City Thunder
Another obvious one right? The Thunder lost one of the best players in the NBA and that hurts. OKC should still be a playoff team, but they are easily the biggest losers this offseason.

Los Angeles Lakers
Let's start with the positives: Jordan Clarkson at four years, $50 million is a quality deal. But the other two major moves the Lakers made are head scratchers. Luol Deng at four years, $72 million is a solid move in a bubble. But the Lakers aren't really ready to be a playoff team. Although Deng will provided needed veteran leadership and can be a quality combo forward, he's not an ideal fit for the Lakers. He could cut into Brandon Ingram's minutes too. But even ignoring the Deng deal, it's impossible to overlook the signing of Timofey Mosgov, which might be the worst signing in all of free agency. Mozgov hardly played for the Cavs team last year and yet he's getting $64 million. He's not even worth half that. Sure, he could regain his previous form where he was a decent starting center, but the Lakers wildly overpaid for Mozgov this offseason.

Portland Trail Blazers
The Trail Blazers wanted a big man, whether it be Hassan Whiteside, Bismack Biyombo, Pau Gasol or any of the bigger names. They ended up with exactly zero bigs. But they did end up with Evan Turner, at a whopping four years, $72 million. Turner can play defense and handle the ball, but can't shoot at all. He doesn't really fill a need for the Blazers, who also now lack the cap space to sign anyone else of note. They can make it by letting Allen Crabbe walk, but that's a bad idea. The Blazers swung and missed badly in free agency.

Houston Rockets
The Rockets lost Dwight Howard, although that's not the worst thing. The problem is, the Rockets haven't found a center to replace him and could start the unproven Clint Capela next year. There's also the two moves the Rockets made: signing Ryan Anderson for four years, $80 million and Eric Gordon at four years, $53 million. Both players can shoot and fit Mike D'Antoni's system. But both players are injury prone struggle on defense (especially Anderson). They were both a bit overpaid, even in this market. The Rockets are going to score a lot of points this year , but they'll give up even more.

Cleveland Cavaliers
The Cavs were several limited this offseason. They've lost Matthew Dellavedova and Mozgov, although that's because the Bucks and Lakers overpaid for both. But with no cap space, the Cavs are left with using the $2.9 MLE and maybe getting another ring chaser. But the real reason the Cavs are losers is because Golden State landed Durant. The Warriors are the heavy title favorites and the path for LeBron to get another title for Cleveland just got a lot harder. That's the case for every team in the NBA next season.