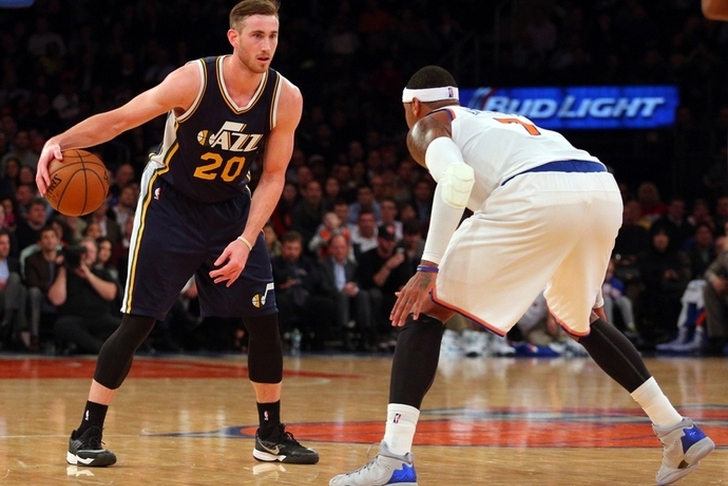 NBA Free Agency remains in full swing, with several top players still unsigned. The top player is still Gordon Hayward, who is meeting with the Utah Jazz today and could make a decision soon. Here are all the latest NBA free agency rumors and news on Hayward and more that you need to know:

Latest On Hayward
Hayward is the top free agent on the market and he remains in his meeting with the Jazz. Ricky Rubio, Rudy Gobert and Joe Ingles are at the meeting, with Hayward open to playing with Rubio.

For those reading tea leaves on Gordon Hayward, word is he told Jazz he wanted Rubio & would love to play w/ him

The decision from Hayward might not take long either. The Boston Herald reports that Hayward wants to make his decision by Tuesday or Wednesday. However, Hayward could decide as soon as tonight.

Rockets, Cavs The Threats For Melo
This isn't a surprise, but Carmelo Anthony is now willing to waive his no-trade clause for two teams: the Cavs and Rockets. Adrian Wojnarowski of ESPN reports that Melo would waive his clause if the Rockets or Cavs were able to find a way to do a trade. However, both teams have problems in actually doing a trade.

The Cavs have no cap space and the Knicks don't want a package built around Iman Shumpert or J.R. Smith. The Cavs won't give up Kevin Love either. The Rockets have had talks, but any deal would likely require the Knicks taking on Ryan Anderson. New York doesn't want that contract.

Another option is the Knicks buying out Anthony's contract. If that's the case, the Cavs and LeBron James are the favored landing spot.

Willie Reed Drawing Interest
Reed isn't a big name, but the 27-year-old backup center is drawing plenty of interest on the open market.

In addition to the Heat, the Pacers, 76ers and Rockets have expressed interest in unrestricted FA Willie Reed, according to league sources.