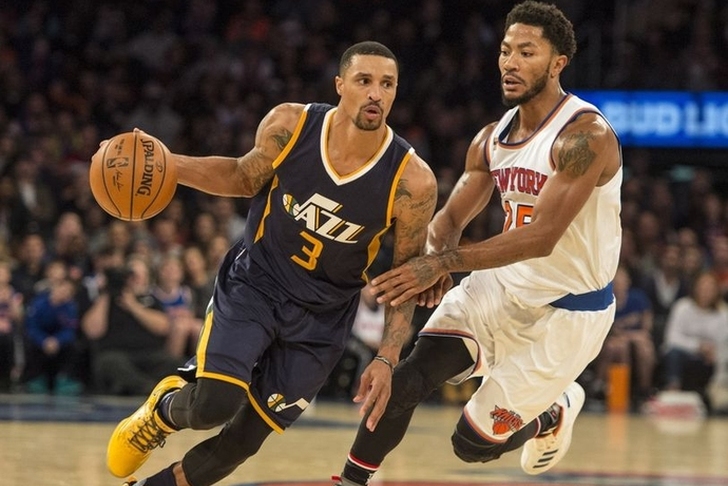 NBA Free Agency remains in full swing, with several top players still unsigned. The top player is still Gordon Hayward, who is meeting with the Utah Jazz today. However, he's not the only notable player taking visits. Here are all the latest NBA free agency rumors and news you need to know:

Bucks And Derrick Rose
The Milwaukee Bucks are searching for point guard help and that's led them to Derrick Rose.

Cap space is an issue for the Bucks, who have only the $8.4 million exception to use. That's why the team is trying to deal players to create cap space. The Knicks are open to a sign-and-trade with Rose. The 28-year-old averaged 18 points and 4.4 assists per game last year, though a string of previous injuries have sapped some of his ability.

Expect the Nuggets to pursue free agent point guard George Hill, if they can dump salary (like Kenneth Faried & Darrell Arthur), per source.

Denver added both Millsap and Lyles this offseason, meaning they don't need Kenneth Faried and his $12.92 million salary or Darrell Arthur's $7.46 million. If Denver does land Hill, it likely eliminates the return of Danilo Gallinari.

Vince Carter Update
Carter is 40 years old, but he's not ready to call it an NBA career just yet.

8-time All-Star Vince Carter is scheduled to take a meeting with the Sacramento Kings on Monday, league sources tell ESPN.

The addition of Carter would not be a win-now move for a Kings that will struggle in a loaded West. Rather, he'd provide some badly needed veteran leadership for one of the younger teams in the NBA. Carter played over 24 minutes per game last year for the Grizzlies, averaging 8 points per game. The Kings have plenty of cap space, even after offering Otto Porter a max deal. However, it's unclear if Carter would want to spend his final season(s) playing for a team that won't win much.