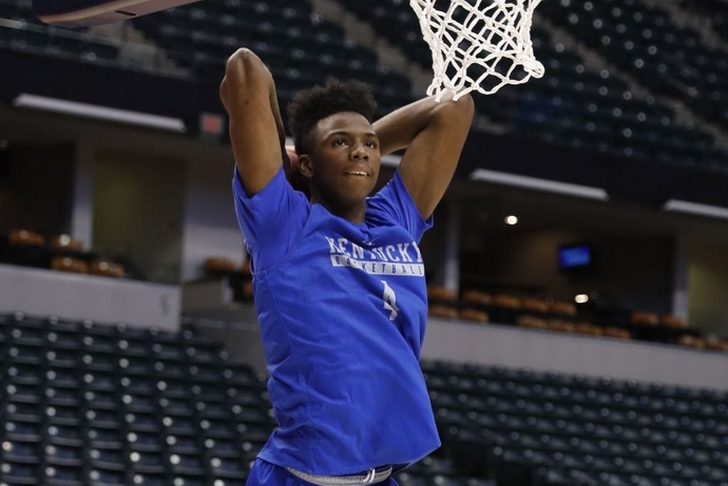 The 2017 NBA Draft deadline for early entrants to make a final decision on whether they will return to school or stay in the draft is today, meaning that the prospect pool will be set after 11:59 pm ET on Wednesday night. Now, with less than a month until the draft, the rumor mill is kicking into high gear. Here are all the latest rumors you need to know:

Timberwolves may trade down in draft
The Minnesota Timberwolves currently hold the No. 7 overall pick in the draft, but they are considering trading down to draft a wing player, according to Marc Berman of the New York Post.

With the seventh pick, the Timberwolves are leaning toward a wing player such as Monk over a big player. An NBA source said Tom Thibodeau, Minnesota’s coach and president, has considered trading down, too.

Minnesota has been most linked to Arizona PF Lauri Markkanen and Florida State PF/SF Jonathan Isaac. If they trade down for a wing player, North Carolina's Justin Jackson and Louisville's Donovan Mitchell figure to be options.

76ers trying to get No. 1 pick from Celtics?
The Philadelphia 76ers hold the No. 3 overall pick in the NBA Draft, and while they are still expected to get a high quality player with that pick, they will likely miss out on the draft's top two potential superstars in Markelle Fultz and Lonzo Ball.

Both of those prospects would also fill a huge need for the Sixers are point guard, and it appears that Philly is entertaining the possibility of trading up to get the No. 1 overall pick. According to The Ringer's Bill Simmons, the 76ers should look to acquire that pick from the Celtics and include power forward Dario Saric to sweeten the deal.

"The only thing I can see them doing--they're going to play it close to the vest," Simmons said. "They're hoping that someone is going do something stupid.

"Philly is the team I keep looking at. So Philly's three. Philly moves up to one and they get Fultz or Lonzo (Ball). Probably Fultz. You put Fultz with Ben Simmons and Embiid and that's it. If you keep Embiid and Simmons healthy, those are your three guys for the next 10 years. So if they love Fultz, and I don't know if they do, would you offer the number three pick, (Dario) Saric, who you don't need because you have Ben Simmons coming, and the Lakers pick next year to move up two spots? That Lakers pick might not be a great pick, because they're gonna try to get better this summer. Is that too much for that pick?"

Fultz is virtually guaranteed to be the No. 1 overall pick after averaging 23.2 points, 5.9 assists and 5.7 rebounds per game as a freshman at Washington.

Saric, who is one of three finalists for Rookie of the Year, averaged 12.8 points, 6.3 rebounds and 2.2 assists per game this season.