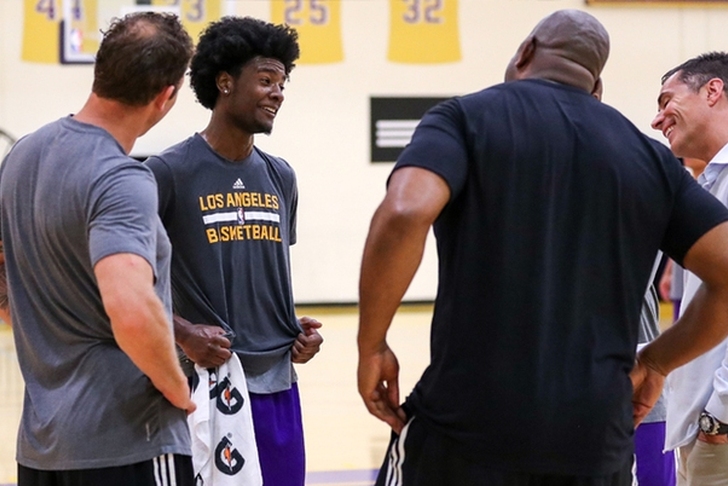 With the NBA Finals over and the NBA Draft just one week away, teams are making their final preparations and bringing players in for last-minute workouts. There are also plenty of rumors swirling about who teams are targeting and which teams are looking to make trades, so we're here to help you sort through the mud. Here are all the latest NBA Draft rumors you need to know:

Lakers "split" on Lonzo Ball, Josh Jackson
The Los Angeles Lakers hosted Kansas small forward Josh Jackson on Tuesday for a second pre-draft workout with the team, and the team is now strongly considering taking him over UCLA's Lonzo Ball, according to Broderick Turner of the Los Angeles Times.

But according to several NBA officials who were not authorized to speak publicly on the matter because no decision has been made yet, the Lakers are split over whether to use their No. 2 pick in the NBA draft on Ball or Jackson.

The Lakers, the officials said, have been having a healthy debate on which course to take because they are intrigued by the talents of both players.

Los Angeles had also been considering Kentucky's De'Aaron Fox with the No. 2 pick, but he appears to be out of the running at this time.

There's no doubt that Jackson has impressed the Lakers - and many other teams - in his workouts and interviews, but it will be a shock if they take him over Ball. LA has been going out of their way to do their due diligence and give the illusion that they aren't set on drafting Ball, but I'm hearing they still plan to take him.

Suns may trade down for Zach Collins
Zach Collins worked out for the Phoenix Suns on Tuesday, and while they won't use their No. 4 pick on him, there's a real possibility they could trade down to land him, according to Doug Haller of the Arizona Republic.

Although the Suns likely won’t target Collins with their No. 4 pick, the big man would be an option if they decide to trade down in the June 22 draft. Most experts have Collins going off the board somewhere between 10 and 15. To start, he might spend most of his time at power forward but eventually teams expect him to play center as well.

“He’s one of those intriguing bigs (who) can stretch the floor but he also has a certain amount of toughness where if you put him around the rim he’s really effective,” Phoenix Assistant General Manager Pat Connelly said. “He didn’t show his 3 ball as much at Gonzaga, but he was really effective and his stroke from NBA 3 looks pretty comfortable.”

Collins averaged 10.0 points, 5.9 rebounds and 1.8 blocks per game for Gonzaga this past season.

Dennis Smith Jr. may drop in draft
NC State point guard Dennis Smith Jr. is one of the most athletic players in the draft, and is expected to go anywhere from the top five to the back end of the top 10. According to Rick Bonnell of the Charlotte Observer, he may even fall a little bit further than that.

There is some talk around NBA that NC State's Dennis Smith might fall a little in draft. Of course, it only takes 1 team, but worth noting.

Jonathan Isaac refusing to work out for Timberwolves
Florida State's Jonathan Isaac is one of the most versatile players in the draft as a 6-foot-11 forward who can play both in the post and on the perimeter. He has been heavily linked to the Minnesota Timberwolves as many think the versatility would make him a great fit next to Karl-Anthony Towns, but he is refusing to work out for them, according to Darren Wolfson of KSTP-TV.

Need to do another podcast... Told Arizona's Lauri Markkanen, elite shooter in this draft, has been in for #Twolves workout. No on Isaac. pic.twitter.com/mYZOmFQeHh

Workouts are always fluid. As of now, MN efforts to get him here have failed.

The Orlando Magic are also very interested in Isaac, and they have the No. 6 overall pick. Minnesota is picking at No. 7.