NBA Draft Rumors: Lakers Willing To Trade Everyone But Ingram, 76ers Targets At No. 3 & More 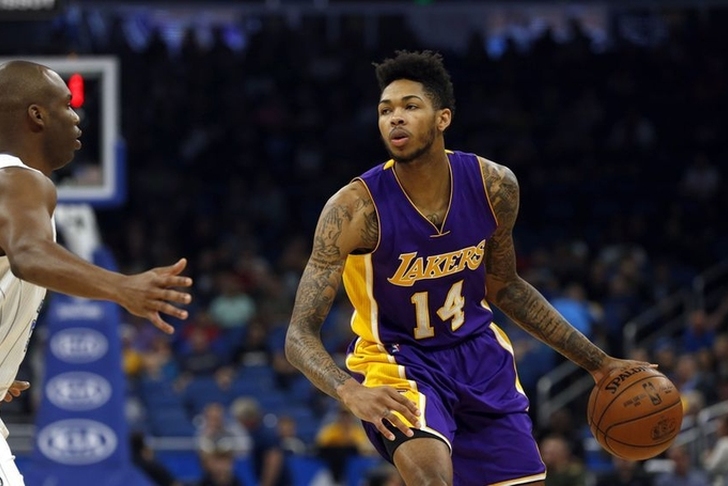 The 2017 NBA Draft deadline for early entrants to withdraw from the draft came and went on Wednesday, meaning that the prospect pool is now set. Now, with less than a month until the draft, the rumor mill is kicking into high gear. Here are all the latest rumors you need to know:

Lakers willing to trade everyone but Ingram
As the Los Angeles Lakers prepare to take Lonzo Ball with the No. 2 overall pick in the draft, they are contemplating making some overall changes to their roster. ESPN's Baxter Holmes reports that the Lakers are willing to everyone on their roster - expect for last year's first round pick, Brandon Ingram.

As the Los Angeles Lakers' new management eyes dramatic change to revive an illustrious franchise that has fallen to historic lows, there's only one player on the roster that Earvin "Magic" Johnson considers untouchable: forward Brandon Ingram.

"I would say probably the only player that we would say, hey, we would probably not move is Brandon Ingram," Johnson, the Lakers president of basketball operations said Thursday in a radio interview with ESPN Los Angeles.

"I think that we're excited about Brandon, his length, his size, his agility, his athleticism. And then when you think about, you know, he was a baby coming in, in his first year last season and we see that he really has a high ceiling and we're excited about what he can possibly turn into."

Los Angeles put Russell on the trade block the night of the lottery after getting the No. 2 pick, and said earlier that they are open to trading power forward Julius Randle.

Ball not working out for Celtics
LaVar Ball, the father of Lonzo, told The Herd with Colin Cowherd earlier this month that Lonzo would only work out for the Lakers, and they're holding firm on that desire.

Boston Celtics general manager Danny Ainge said that the team tried to bring Ball in for a workout but they declined the invitation, according to ESPN's Chris Forsberg.

Boston Celtics president of basketball operations Danny Ainge confirmed Thursday that Lonzo Ball's camp has informed the Celtics he will not work out for them prior to the NBA draft.

During his weekly appearance on Boston sports radio 98.5 The Sports Hub, Ainge said it's not an ideal situation, with the Celtics eager to evaluate all top talent while owning the No. 1 pick. But he noted that the Celtics have drafted players who didn't work out for them in the past.

"We tried to get [Ball] in," Ainge told the "Toucher and Rich" program while Boston's front-office staff traveled for a draft workout in New York that included Duke's Harry Giles and Kentucky's Malik Monk. "We don't deal with [Ball's camp] all that much. They didn't show up at the combine, which is very common -- many of the top 10 or 15 players don't show up for the combine. ... We just tried to get him in for a workout and they politely said no."

Lonzo and his father have made it known that they would prefer to play for the Lakers. The 6-foot-6, 190-pound Ball averaged 14.6 points, 7.6 assists and 6.0 rebounds per game while leading UCLA to a 31-5 record this season.

76ers targeting Fox, Smith with No. 3 pick?
The Philadelphia 76ers are looking to address their needs in the backcourt with the No. 3 overall pick in the draft, but with rumors of them moving Ben Simmons to point guard, their focus was expected to be on Kentucky's Malik Monk or Kansas' Josh Jackson.

However, it does appear that point guard is a top priority for them - and they've identified two of their top targets. According to Stefan Bondy of the New York Daily News, the Sixers are very interested in Kentucky's De'Aaron Fox and NC State's Dennis Smith Jr.

The Sixers like both De'Aaron Fox and Dennis Smith Jr. for the third pick, according to sources.

Fox has drawn a lot of interest since the combine from teams picking in the top five, and the Sacramento Kings have taken a very strong liking to him. Their interest in him may simply be a smokescreen to try and get a team like Sacramento to trade up.

Smith is more of a combo guard than a true point guard, so Philadelphia could be interested in him playing alongside Simmons in the backcourt. However, he's projected to be drafted in the 5-10 range, potentially giving the Sixers another reason to trade back if they so choose.