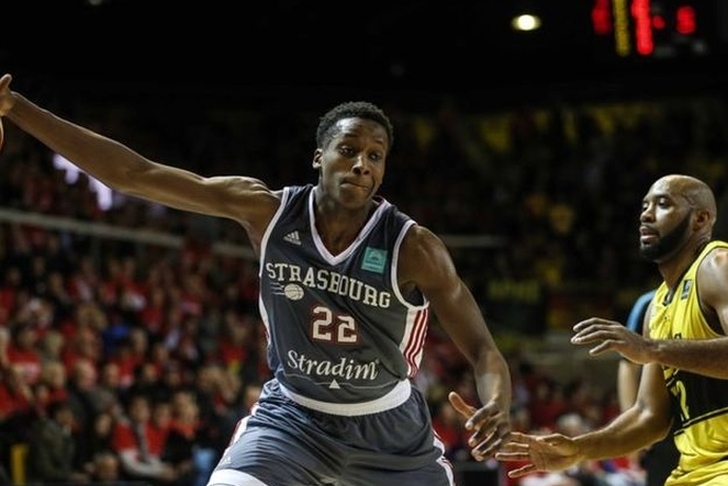 The 2017 NBA Draft is a month and a half away, and with the NBA Combine getting started next week, the rumor mill is starting to heat up. After the combine, early entrants who have not signed with an agent have until May 24 to withdraw and return to school. Here are all the latest draft news & rumors you need to know:

Knicks reportedly "enamored" with Frank Ntilikina
The New York Knicks will have the No. 7 pick in the draft, barring a change in the lottery, and they are expected to use that selection to pick a point guard in a class loaded at the position.

College stars like Kentucky's De'Aaron Fox and NC State's Dennis Smith Jr. are expected to be available with that pick, but Marc Berman of the New York Post reports that the Knicks are targeting French point guard Frank Ntilikina instead:

The 6-foot-5 Ntikilina is considered the top international prospect in the draft, and if the Knicks stay with the seventh pick, he would be heavily considered.

A talented project, Ntilikina's biggest upside comes as a defender thanks to his quick feet and remarkable seven-foot wingspan.

Ntilikina, who was born is Belguim, has been playing professionally for Strasbourg since the 2014-15 season. He is averaging 5.2 points, 2.0 rebounds and 1.2 assists per game this season while shooting 57.8 percent from the floor and 44.2 percent from three-point range.

Hawks looking to trade Dwight Howard for 2nd round pick?
The Atlanta Hawks are gauging the trade market for center Dwight Howard before the draft, but if they do decide to pursue a deal, they won't be much in return. According to ESPN's Kevin Arnovitz, the best the Hawks could do would be to get a second round pick for him:

A poll of 8 NBA front office execs has yielded that -- best case -- the @ATLHawks could get a 2nd-rounder and cap relief for Dwight Howard.

Lakers targeting Caleb Swanigan with No. 28 pick?
The Los Angeles Lakers are hoping to hold onto their top three pick in the NBA Draft (it goes to the 76ers if if falls out of the top three), but they also have the No. 28 overall pick thanks to the Lou Williams trade.

Swanigan is your prototypical big man bruiser. The one very important aspect about his game is that, unlike many players his size, he has the ability to step outside to hit a 3-point shot when needed.

Along with being named a first-team All-American last season, “Biggie Swanigan” broke many Purdue records. He finished the season with a 28 double-doubles in 35 games. That number is tied for 13th in NCAA history.

Swanigan would fit right into the Lakers mold, a high-energy type of player who gives it his all on every play. If the Lakers decide to move on from Timofey Mozgov this offseason, Swanigan is just the man to step right into the back-up center role.